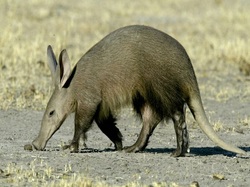 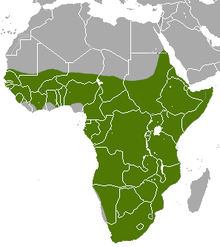 Aardvark range of location
Scientific Classification
Kingdom: Animalia
Phylum: Chordata
Class: Mammalia
Superorder: Afrotheria
Order: Tubulidentata
Family: Orycteropodidae
Genus: Orycteropus
Species: O. afer
Binomial name: Orycteropus afer
Description
Length: 1 to 1.3 metres (Up to 2metres with the tail included).
Weight: 40 to 65 kg
Coat: Short, rough, course hairs. Brown/black/grey in colour.
Head: They have a long head with a snout, set on a short, thick neck. The Aardvark has a long, thin tongue used to eat insects like termites.
Tail: The tail is very thick at the base.
Feet: Their front feet do not have thumbs, resulting in four toes on each of the front feet, with five twos on each of the back feet. Each toes has a nail, which looks between a claw and a hoof.
Other: The Aardvark look quite similar to a pig. They have an arched back, covered with coarse hairs.  The ears are long.
Behaviour
The Aardvark are nocturnal, which means they sleep during the day, and are awake during the night. Aardvarks are solitary creatures, which mean they keep to themselves, except for mating. The Aardvark can swing its nose, until enough ants or termites are detected. They can do this for 10 to 30 km. They can dig with their large, powerful front legs, and listen for predators with their large ears. Aardvarks can eat up to 50,000 ant or termites a night. They can dig 2 ft in 15 seconds. Aardvark live in burrows, which they build, themselves. They are used to live in, and to breed in. The burrows can be deep and extensive, have several entrances and can be as long as 13 metres. Aardvarks 'move home' quite a lot, building new burrows. The burrows are then inhabited by smaller animals like the African wild dog. Only mothers and young share burrows. If attacked in the tunnel, it will seal the tunnel off behind itself or turn around and attack with its claws.
Predators or Prey?
The aardvark's only prey are ants and termites. Their main predators are lions, leopards, hunting dogs and pythons. Some African tribes also hunt aardvarks for meat. Aardvarks can dig fast or run in zigzag fashion to elude enemies, but if all else fails, they will strike with their claws, tail and shoulders, sometimes flipping onto their backs to lash with all fours. Their thick skin also protects them to some extent.
Diet
They only eat termites and ants.
Habitat
Aardvarks live in sub-Saharan Africa, where there is suitable habitat for them to live, such as savannas, grasslands, woodlands and bushland, and available food (i.e., ants and termites).
Conservation
The conservation of Aardvarks are not very important. This is because their conservation status is of 'least concern'. This is because there is a good sized population of Aardvark. This is also why not many aardvark are seen in zoos.
Reproduction
A pair only meet during the mating season. The gestation period is about 7 months, with 1 cub weighing about 2 kg. The cub is able to leave the burrow to accompany its mother after only two weeks, and is eating termites at 14 weeks and is weaned by 16 weeks. At six months of age it is able to dig its own burrows, but it will often remain with the mother until the next mating season, and is sexually capable by the season after that.