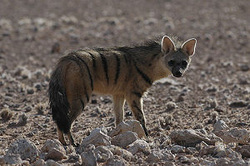 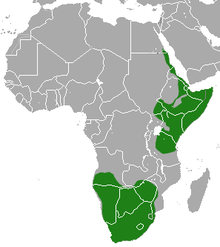 Scientific Classification
Kingdom: Animalia
Phylum: Chordata
Class: Mammalia
Order: Carnivora
Family: Hyaenidae
Subfamily: Protelinae
Genus: Proteles
Species: P. cristata
Description
Body Length: 55 to 80 cm (22 to 31 in)
Tail Length: 20 to 30 cm (8 to 12 in)
Height: 40 to 50 cm (16 to 20 in)
Weight: 9 to 14 kg (20 to 31 lb)
Other: The aardwolf looks like a very small Striped Hyena. They have a more slender muzzle, sharper ears utilized in the hunt for harvester termites, black vertical stripes on a coat of yellowish fur, and a long, distinct mane down the middle line of the neck and back, which is raised during a confrontation to make the aardwolf's size appear bigger. Its front feet have 5 toes, unlike other hyenas which have four toes. Its teeth and skull are similar to that of the hyena, although the cheek teeth are specialised for eating insects, and its tongue for licking them up. As the aardwolf ages, it will normally lose some of its teeth, though this has little impact on their feeding habits due to the soft nature of the insects they consume. It has two glands at the rear that secrete a musky fluid for marking territory and communicating with other aardwolves.
Behaviour
The Aardwolf is shy and usually hunts for food alone at night. It uses its sticky, long tongue to collect termites from their mounds, but takes care not to destroy the mounds or eat all the termites at one go. It often returns to the same mound for hunting. During the day, it sleeps in underground burrows of aardvarks, Old World porcupines, or springhares. Apart from aggressive encounters, territories are maintained by means of depositing (pasting) secretions from the anal gland on grass stalks. Both sexes scent mark (paste), although males mark more than females. Pasting occurs on average more than two times per 100 m moved and about 200 times per night. Scent marks are concentrated along the territory boundary and at dens and middens. Aardwolves also have areas within their territories that are designated for urination and defecation spread throughout their territories. These areas are called middens. Individuals dig a hole in the midden each time they visit it to urinate or defecate. After urination or defecation is completed, the hole is covered up by the individual. The aardwolf uses various sensory modalities in communication. Vocal communication is limited and generally directed at intruders or predators. It consists of a clucking sound, made by opening and closing the mouth, a deep growl, or a roar.
Predators or Prey?
Humans and dogs are the main predators of Aardwolves. The Aardwolf's prey are mostly termites and occasionally other insects larvae.
Diet
Its diet almost completely consists of termites, other insect larvae and carrion.
Habitat
The aardwolf lives on open, dry plains and bushland, avoiding mountainous areas. Due to its specific food requirements, the animal is only found in regions where termites occur. Termites of this family depend on dead and withered grass and are most populous in heavily grazed grasslands and savannahs, including farmland.
Conservation
Although there is little information from most northern range states, the overall status of the aardwolf currently can be described as Lower Risk: Least Concern (IUCN, 1996, appendix 6). Although the aardwolf may be harvested as a food source and purposefully or accidentally killed in predator control programmes, these mortalities appear to be of little significance in areas with well-established populations. The greatest threat to the aardwolf is from spraying poisons on swarms of locusts. These events could significantly affect populations and could even lead to local extinctions, particularly if repeat sprayings occurred within four years of each other.
Reproduction
The Aardwolf live as monogamous pairs, with their young, defending the same territory. Young aardwolves generally achieve sexual maturity after two years, and the breeding season varies depending on their location, but normally takes place during the autumn or spring. During the breeding season, unpaired male aardwolves will search their own territory as well as others' for a female to mate with. Dominant males will also mate opportunistically with the females of less dominant neighboring aardwolves. This can often result in conflict between two male aardwolves when one has wandered into another's territory. Gestation lasts between 90 and 110 days, producing one to five cubs (most often two or three) during the rainy season, when termites are active. The first six to eight weeks are spent in the den with the mother. After three months, they begin supervised foraging and by four months are normally independent. However, they will often use the same den as their mother until the next breeding season.