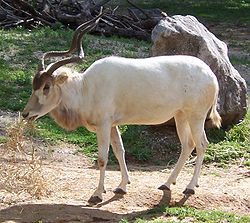 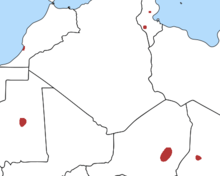 Addax range of location
Scientific classification
Kingdom: Animalia
Class: Mammal
Order: Artiodactyla
Family: Bovidae
Subfamily: Hippotraginae
Genus: Addax
Species: A. nasomaculatus
Binomial name: Addax nasomaculatus
Description
Height: 1 metre (3.3 feet) at the shoulder
Weight: 60 to 120 kg (130 to 260 lbs)
Coat colour:  In the winter it is greyish brown with white hind quarters and legs. In the summer, the coat turns almost completely white or sandy blonde.
Head: Their head is marked with brown or black patches that form an X over their nose. They have a scraggly beard and prominent red nostrils. Long black hairs stick out between their curved and spiraling horns ending in a short mane on the neck.Horns, found on both males and females, have two to three twists and can reach 80 centimeters (31 in) in females and 120 centimeters (47 in) in males.
Tail: Their tail is short and slender, ending in a puff of hair.
Hooves: The hooves are broad with flat soles and strong dewclaws to help them walk on soft sand.
Behaviour
Addax are 'nocturnal'. This means that they sleep during the day and are awake during the night. They do this because it is easier to feed at night when the temperature is cooler. During the day, Addax sleep so they can conserve their energy in the hot weather. The Addax live in a group of about 5 to 20 individuals.
Predators or Prey?
Lions, Leopards, and Hyenas. Although, these predators are completely or almost extinct in the wild (some live in conservation).
Diet
The Addax is a herbivore. This means that they only eat vegetables (no meat). This is because more energy comes from plants, which is very important in the tough habitat. Their diet consists of desert succulents, leaves, Aristida grasses, herbs, perennials and small bushes (if available). Addax can survive without water because they can get all the water they need from the plants that they eat.
Habitat
The Addax live on sandy or stony deserts, semi-deserts, or dry steppes. When they rest during the day, they lay in holes in the sand, often near giant rocks to hide from the sun and wind.
Conservation
There are fewer than 300 Addax left in the wild. They mostly only remain in Chad  Mauritania, and Niger. Although, more than 1600 live in captivity all around the world. Additionally, around 550 live under semi-wild conditions in fenced in areas in Morocco and Tunisia. This is a total of around 2450 Addax left in the entire world.
Reproduction
Male Addax reach sexual maturity at about 3 years, while the females mature at about 1 and a half years. The gestation period is about 8 to 9 months. A female Addax will give birth to one young at each birth. This reproduction is very similar to that of humans.The baby Addax will weight between 4.7 and 6.75 kilograms. It is hidden away for about 6 weeks (away from predators) and suckled 2 to 3 times a day on its mother. Young Addax have a tan coloured coat with very faint or no markings.