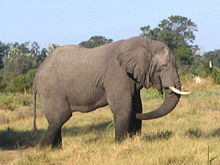 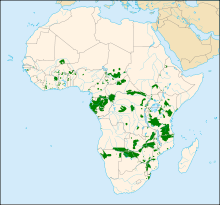 African Elephant range of location
Scientific Classification
Kingdom: Animalia
Phylum: Chordata
Class: Mammalia
Order: Proboscidea
Family: Elephantidae
Genus: Loxodonta
Species
Description
Height: Males stand 3.2–4.0 m (10–13 ft) tall at the shoulder. Females stand 2.2–2.6 m (7.2–8.5 ft) tall at the shoulder.
Weight: Males weigh 4,700–6,048 kg (10,000–13,330 lb). Females weigh 2,160–3,232 kg (4,800–7,130 lb).
Skin: Elephants have thick skin, like on the trunk embouchure, legs and back, skin can in fact be 2.5 to 3 cms thick, but behind the ears, by the eye, on the abdomen, chest and shoulders it is as thin as paper. People who touch an elephant´s skin for the first time often describe it as like an eraser. This means that elephant skin is rough, and thick.
Teeth: Elephants have four molars; each weighs about 5 kg (11 lb) and measures about 30 cm (12 in) long. At about 40 to 60 years of age, the elephant no longer has teeth and will likely die of starvation, a common cause of death. Their tusks are teeth; the second set of incisors become the tusks. They are used for digging for roots and stripping the bark off trees for food, for fighting each other during mating season, and for defending themselves against predators. The tusks weigh from 23–45 kg (51–99 lb) and can be from 1.5–2.4 m (5–8 ft) long. Unlike Asian elephants, both male and female African elephants have tusks.
Behaviour
African Elephants live in herds. There is always a hierarchy, with the oldest female leading the herd. In a herd, there are 10 to 15 related individuals. They are very protective of their young, keeping them near their side, away from predators. They communicate with sounds lower than human hearing. Male elephants live in a bachelor herd (apart from mating season), while female stay in the herd they were born in. At night, adult elephants circle the calves to protect them from predators.
Predators or Prey?
The African elephant's size makes them hard for predators to eat, such as leopards, lions, or jaguars. At night, the adults form a circle around the calves to protect them from danger. But in the day, an unlucky calf might wander away from the herd and be some predator's lunch. But adults have thick skin, making it hard to bite. The African Elephant's main predators are humans. Poachers murder elephants in order to sell the tusks for the 'Ivory Trade'. The bodies are left for carnivores to eat them (apart from the tusks).
Diet
African elephants are herbivores. They feed on plant material such as grasses, buds, fruits, leaves, roots and bark.
Habitat
African Elephants live in the Savanna. They once inhabited a range that stretched from the Southern Sahara Desert to the southern tip of Africa and reached from the west coast of Africa to the Indian Ocean. Today, African Elephants are restricted to small pockets in southern Africa.
Conservation
In the 10 years before poaching elephants was banned, the African Elephant population more than halved from 1.3 million to around 600,000. To protect the African Elephant, recorded sounds of angry honey bees are played near elephant herds to move them away from poaching areas.
Reproduction
Females become sexually mature between the ages of 12 and 14 years. Pregnancy is 22 months long and is timed so that calves are born during the rainy season when food is plentiful. When born, calves are large and mature slowly. At birth, they can weigh about 200 pounds and about 3 feet tall. Since calves require much care as they develop, only one calf is born at a time and females only give birth about once every five years. A mother is usually helped by another female during the birth. The calf is then nursed until about 3 years old, and very dependent on its mother for 8 to 10 years. When they are mature, male elephants leave the herd to join bachelor herds (apart from mating season), while females stay in the herd they were born in.