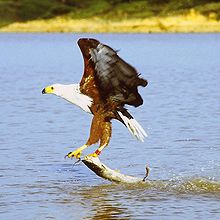 Kingdom: Animalia
Phylum: Chordata
Class: Aves
Order: Falconiformes or Accipitriformes
Family: Accipitridae
Genus: Haliaeetus
Species: H. vocifer
Binomial name: Haliaeetus vocifer
Description
Height: 63 - 75 cm (25 - 30 in).
Wingspan: Male is 2 m (6 feet). Female is 2.4m (8 feet).
Weight: Male is 2-2.5 kg (4.4-5.5 lbs). Female is 3.2-3.6 kg (7-8 lbs).
They are very distinctive in appearance with a mostly brown body and large, powerful, black wings. The head, breast, and tail of African Fish Eagles are snow white and the hook-shaped beak is mostly yellow with a black tip.
Behaviour
The African Fish Eagle has two distinct calls. In flight or perched, the sound is something like the American Bald Eagle. When near the nest its call is more of a 'quock' sound - the female is a little shriller and less mellow than the male. So well known and clear is the call of this bird that it is often known as 'the voice of Africa'. The African Fish Eagle is usually seen in pairs inside and outside the breeding season, even sharing kills made by either of them. They spend more time perched than flying, and usually settle for the day by 10am, having made their kill, although they will kill at any time of the day.
Predators or Prey?
The African Fish Eagle has prey such as fish, waterfowl, small turtles, baby crocodiles, greater and lesser flamingos, and carrion.
Diet
The African Fish Eagle will usually feed on fish. If it catches a fish over 1.8 kg (4 pounds), it will be too heavy to fly off with, so it will drag the fish on the surface of the water, until it reaches the shore. It will also feed on waterfowl, small turtles, baby crocodiles, greater flamingos, lesser flamingos, and carrion.
Habitat
This species is still quite common near freshwater lakes, reservoirs, or rivers, although they can sometimes be found near the coast at the mouths of rivers or lagoons.
Conservation
The conservation of the African Fish Eagle is not greatly important. This is because its conservation status is of 'least concern'. This means that the population of African Fish Eagle are high.
Reproduction
The mating season is during the 'dry season' when water levels are low. African Fish Eagles mate for life, and can obtain 2 or 3 nests which they will keeping re-using. The nests can be up to 2m (6 ft) across and 1.2 m (4 ft) deep. The female lay 1 to 3 eggs. The female will lay on the eggs, except when she is hunting, the male will lay on the eggs. This will happen for 42 to 45 days, until the chicks hatch. The eldest chick will usually kills its younger siblings for survival. Fledging lasts for 70 to 75 days, and after about 8 weeks the chick is capable of feeding itself and will usually begin to venture outside of the nest 2 weeks later.