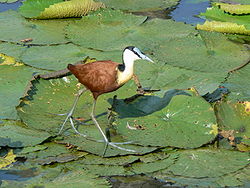 Scientific classification
Kingdom: Animalia
Phylum: Chordata
Class: Aves
Order: Charadriiformes
Family: Jacanidae
Genus: Actophilornis
Species: A. Africana
Binomial name: Actophilornis africana
Description
Height: 30 cm long.
Weight: 4 to 9 ounces.
Coat: They have chestnut upperparts with black wingtips,rear neck and eyestripe. The underparts are white,with a chestnut belly patch in adult birds.
Head: The blue bill extends up as a coot-like head shield.Feet: The legs are very long to balance on the water plants. The toes have a grey colour.
Other: The females are larger than the males.

Behaviour
African Jacanas are sociable birds, often gathering together near swamp-like habitats. Aggressive behavior among same-sexed birds begins at the end of winter and intensifies before the (November to March) mating season. The female African Jacana is more dominant than her male counterpart. Females are twice as large as males and can be very picky about who they choose as a mate. The female African Jacanas does not generally choose the same male partner for every clutch of eggs that she lays. This species of birds are known as ‘lily walkers’ because their slender legs and toes give them the gracefulness to walk on the lily pads that blanket their wetlands. Due to their smaller size, males are more graceful ‘lily walkers’ than females. These graceful birds are also good divers and strong flyers. They squawk during flight and carry a pitch that resembles a loud, mournful, whining sound. Like most birds, the African Jacana has a keen sense of sight and hearing and relies little on its sense of smell.
Predators or Prey?
Snakes, otters, water mongooses and other birds are predators of the African Jacana's eggs.
Diet
The African Jacana's food is insects and other invertebrates picked from the floating vegetation or the water’s surface. This also includes aquatic larvae, small crabs, snails, and seeds.
Habitat
They are found throughout Zimbabwe, Mozambique, northern Namibia, northern Botswana, and eastern South Africa.  These countries have a very hot climate. The African Jacana lives near freshwater to find food, or hide from predators.
Conservation
The African Jacana are very common in Africa. Their conservation status is of 'least concern'. This means that not
Reproduction
The African Jacana lays four black-marked brown eggs in a floating nest. The males take responsibility for incubation, which means the males sit on the eggs until the chicks hatch. A mating pair can have up to 30 clutches of eggs each season, resulting from either the same partner or various partners.