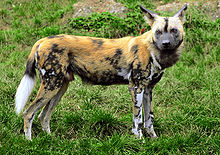 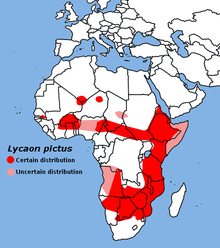 African Wild Dog range of location
Scientific Classification
Kingdom: Animalia
Phylum: Chordata
Class: Mammalia
Order: Carnivora
Family: Canidae
Genus: Lycaon
Species: L. Pictus
Binomial name: Lycaon Pictus
Description
Height: 75 centimetres (30 in) at the shoulder
Length: A head and body length averaging about 100 centimetres (39 in) long with a tail of 30 to 45 centimetres (12 to 18 in)
Weight: 18–34 kilograms (40–75 lb)
Coat: No two dogs have identical coat patterns of white, black and tan; yet close relatives are recognizably similar in coloration.
Other: Males are slightly larger than females, and animals from Southern Africa are slightly larger than their northern relatives.
Behaviour
In packs, there are separate male and female hierarchies that will split up if either of the alphas die. In the female group, the oldest will have alpha status over the others, so a mother will retain her alpha status over her daughters. For the males, the alpha brother or the father of the other males will be dominant. When two such loner separate-gender groups meet, if unrelated they can form a pack together. Dominance is established without blood-shed, as most dogs within a group tend to be related to one another in some way, and when this is not the case they have a submission-based hierarchy, instead of a dominance based one. Submission and nonaggression is emphasized heavily, even over food they will beg energetically instead of fight. This is likely because of their manner of raising huge litters of dependent pups, so if one individual is injured the entire pack would not be able to provide as much.
Predators or Prey?
The only predators African Wild Dogs have are humans. They are shot or poisoned by farmers. This is because the farmers' livestock (sheep, cows) are being killed by the African Wild Dog. The African Wild Dog preys upon many animals. These prey include Gazelles, Zebras, Wildebeest, Buffalos, and many other animals. The African Wild Dog will also prey on the young (babies) of these animals because they are weaker and more vulnerable.
Diet
The African Wild Dogs are carnivores. This means that they only eat meat. Their diet consists of:
Habitat
African Wild Dogs are savanna inhabitants and their normal range is from south of the Sahara Desert, except in forested areas. Dense forest areas are well used, especially when cubs are born. The forest area hides the cubs and the mother away from predators. The pride will hunt closer to the den, therefore in forested areas.
Conservation
The African wild dog is listed by the IUCN as threatened by extinction.  They are nearly as endangered as the black rhino and they are still persecuted by farmers and hunters.  Fewer than 5,000 dogs remain and because they need vast home ranges, it makes conservation difficult.

Reproduction
The alpha male and female join together to produce the strongest possible cubs. The gestation period is about 70 days. After these 70 days, the cubs are born in a burrow under a tree (underground den). As many as 12 can be born, but only a few usually survive. Pups at birth are all black and white. The tan patches develop from the black areas beginning in the second month. The pups eyes open at 3 weeks, but they will not emerge from the den until they start to eat solid food regurgitated by the adults. Only the dominant male and female in the pack (the alpha pair) reproduce. The entire pack is needed to help feed the large litter of young that are dependent for 12-14 months. The adults eat at their kill site, then return to the den and regurgitate meat as food for the young. Adult males stay with the birth pack. Unlike other animals, females between 14 and 30 months of age will leave their natal pack in groups of littermate sisters.  They will eventually join a different male kin line.