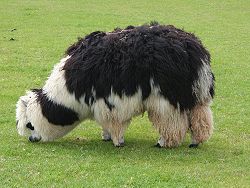 Alpaca Range of location
Scientific Classification
Kingdom: Animalia
Phylum: Chordata
Class: Mammalia
Order: Artiodactyla
Family: Camelidae
Genus: Vicugna
Species: V. Pacos
Binomial name: Vicugna pacos
Description
Height:
Weight:
Coat:
Feet:
Other:
Behaviour
Alpacas are social herd animals that live in family groups consisting of a territorial alpha male, females and their young. Alpacas warn the herd about intruders by making sharp, noisy inhalations that sound like a high pitched bray. The herd may attack smaller predators with their front feet, and can kick and spit. Not all alpacas spit, but all are capable of doing so. "Spit" is somewhat euphemistic; occasionally the projectile contains only air and a little saliva, although alpacas commonly bring up acidic stomach contents (generally a green grassy mix) and project it onto their chosen target. Spitting is mostly reserved for other alpacas, but an alpaca will occasionally spit at a human.For alpacas, spitting results in what is called "sour mouth". Sour mouth is characterized by a loose-hanging lower lip and a gaping mouth. This is caused by the stomach acids and unpleasant taste of the contents as they pass out of the mouth.
Most alpacas do not like being grabbed. Some alpacas tolerate being stroked or petted anywhere on their bodies, although many do not like their feet, lower legs, and especially their abdomen touched or handled.
Alpacas use a communal dung pile, where they do not graze. This behaviour tends to limit the spread of internal parasites. Generally, males have much tidier, and fewer dung piles than females who tend to stand in a line and all go at once. One female approaches the dung pile and begins to urinate and/or defecate, and the rest of the herd often follows. Because of their preference for using a dung pile, some alpacas have been successfully house-trained.
Predators or Prey?
The alpaca is prey to mountain lions, coyotes, bears, and other carnivores. In its native Andes, the alpaca's long neck helps spot predators among the rocks of the mountain slopes. On US ranchs, llamas, donkeys, and guard dogs such as Anatolian shepherd dogs are often used as herd guardians.
Diet
Alpacas generally eat hay or grasses, but can eat some other plants (e.g. some leaves). Alpacas will normally try to chew on almost anything (e.g. empty bottle). Many plants are poisonous to the alpaca, including the bracken fern, fire-weed, oleander, and some azaleas. In common with similar livestock, others include: acorns, African rue, agave,amaryllis, autumn crocus, bear grass, broom snake-weed, buckwheat, ragweed, buttercups, calla lily, orange tree, carnations, beans from the castor oil plant, and a great many others.
Habitat
Alpacas originated from the Andean Mountain Range in southern Peru, northern Bolivia, Ecuador, and northern Chile. The altitude of the mountain range is 3,500 m (11,500 ft) to 5,000 m (16,000 ft) above sea-level. The mountain range is close to the South Pacific Ocean.
Conservation
Like dog and cats, Alpacas are domesticated. This means that many people keep them as pets or herd them like sheep. This also means that there are a large population of Alpacas. Therefore, conservation is not needed. Many farmers can easily breed Alpacas for the production of wool.
Reproduction
A male is usually able to mate between 1 and 3 years of age. A female will fully mature between 1 and 2 years of age. The gestation period is about 345 days, give or take about 15 days. Twins are rare as it only happens in every one out of 1000 births. After a female gives birth, she can mate again after 2 weeks. The babies are called 'Crias'. Crias may be weaned through human intervention at about 6 months and 60 pounds, but many breeders prefer to allow the female to decide when to wean her offspring. Offspring can be weaned earlier or later depending on their size and emotional maturity.