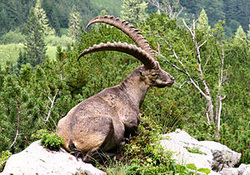 Today, about 4,000 Alpine Ibex roam the area of the king's preserve, now the Gran Paradiso National Park. These, and all other Alpine Ibex are descendants of the animals from King Emmanuel's preserve, and are now protected by law.

Reproduction
Male ibexes often group together in bachelor herds during summer; in late autumn, during rut, males typically go their own ways and seek out a female herd of their own. During breeding season, fight rituals occur between males in order to determine which is entitled to breed with the available females. Despite the large, heavy horns of the males playing a part in this ritual, it is rare that they are physically harmed in the process. After conception, and gestation period of 6 months, a single kid, meaning 'baby Alpine Ibex', is born around May. Twins are very rare to be born.