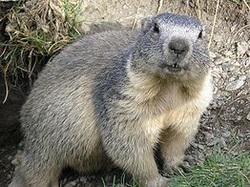 Facts
Conservation Status: Least Concern
Location: Mountainous areas of central and southern Europe
Lifespan: Usually 4 to 5 years, but can be up to 14 years in captivity.
Scientific Classification
Kingdom: Animalia
Phylum: Chordata
Class: Mammalia
Order: Rodentia
Family: Sciuridae
Genus: Marmota
Species: M. marmota
Binomial name: Marmota marmota
Description
Height: 18 cm at the shoulder.
Weight: 4 and 8 kg.
Length: 42–54 cm in length (not including the tail).
Tail: Measures between 13–16 cm on average.
Behaviour
As the summer comes to end, the Alpine Marmot begins to hibernate. They bring old stems in their burrows to use as bedding. The hibernation can start as early as October. It will last for about 3 months out of the year. They seal the burrow with a combination of earth and their own faeces. Once winter arrives, alpine marmots will huddle next to each other and begin hibernation, a process which lowers their heart rate to five beats per minute and breathing to 1–3 breaths per minute, which uses up their stored fat supplies as slowly as possible. Body temperature will drop to almost the same as the air around them, although heart rate and breathing will speed up if the environment approaches freezing point. Some alpine marmots will starve to death due to their layer of fat running out; this is most likely to happen in younger alpine marmots.
Predators or Prey?
Although not currently in any danger of extinction, alpine marmots used to be widely hunted due to the belief that their fat would ease rheumatism when rubbed on the skin. However, hunting of the alpine marmot still occurs for sport purposes. This is a danger to the species, as they are relatively slow at breeding. Certain sub-populations of marmot may be threatened such as the those in the Jura and in Germany. There is a population in Rodna that is very small and threatened by poaching.
Diet
Alpine marmots eat plants such as grasses and herbs, as well as grain, insects, spiders and worms. They prefer young and tender plants over any other kind, and hold food in their forepaws while eating. They mainly emerge from their burrows to engage in feeding during the morning and afternoon, as they are not well suited to heat, which may result in them not feeding at all on very warm days. When the weather is suitable, they will consume large amounts of food in order to create a layer of fat on their body, enabling them to survive their long hibernation period.
Habitat
Alpine Marmots are found in the mountainous areas of central and southern Europe. Alpine marmots live at heights between 800 and 3,200 metres in the Alps, Carpathians, Tatras, the Pyrenees and Northern Apennines, Italy.
Conservation
The conservation status of the Alpine Marmot is of 'Least Concern'. Therefore, the conservation is not greatly important because the population of Alpine marmots is a good size.
Reproduction
The mating season for alpine marmots occurs in the spring, right after their hibernation period comes to a close, which gives their offspring the highest possible chance of surviving the coming winter. Alpine marmots are able to breed once they reach an age of two years. Dominant females tend to suppress reproduction of subordinates by being antagonistic towards them while they are pregnant while causes stress and kills the young. Once the female is pregnant, she will take bedding materials (such as grass) into the burrow for when she gives birth after a gestation period of 33–34 days. Each litter consists of between one to seven babies, though this number is usually three. The babies are born blind and will grow dark fur within several days. The weaning period takes a further forty days, during which time the mother will leave the young in the burrow while she searches for food. After this period, the offspring will come out of the burrow and search for solid food themselves. Their fur becomes the same colour as other alpine marmots by the end of the summer, and after two years they will have reached their full size.