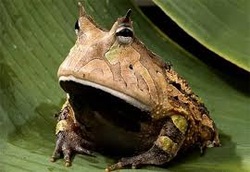 Facts
Also known as: Surinam Horned Frog
Conservation Status: Least Concern
Location: Northern Part of South America
Lifespan: Up to 10 or 15 years
Scientific Classification
Kingdom: Animalia
Phylum: Chordata
Class: Amphibia
Order: Anura
Suborder: Neobatrachia
Family: Leptodactylidae
Genus: Ceratophrys
Species: C. cornuta
Binomial name: Ceratophrys cornuta
Description
Length: Up to 20 cm
Other: It has an exceptionally wide mouth, and has horn-like projections above its eyes. The Amazon Horned frog is perhaps the most striking in appearance of all the horned frogs due to its high "horns" over the eyes and extremely large mouth in relation to the length of its body. Body colors vary from light and dark shades of green to dark brown to beige. The throat of both sexes is black. It is virtually impossible to determine sex other than by the size difference in adult animals with the male being substantially smaller. Amazon Horned frogs collected from the wild feed primarily on other frogs while those bred in captivity are much less selective, feeding on crickets as well as other insects, and small mice.
Behaviour
Males are fiercely territorial, guarding their spot of earth as if it were their life.  Men are aggressors, and females are the caregivers. Although it is a large frog, the Surinam horned frog can do quite a vanishing act. The ground of the rainforest is cluttered with growing plants and mounds of fallen leaves. This frog hops to such a mound, shuffles its body back and forth until all but its head is buried in the leaves, and then stops moving. With its pointy eyebrows that look like the edges of curled leaves and its camouflage colors, the frog nearly disappears. From here, it can watch for prey animals to walk unknowingly past. When one approaches closely enough, the frog lunges out, opens its immense mouth, and snaps it up. The frog may continue this style of sit-and-wait hunting, called ambush hunting, for several days from the same spot. It usually waits until dark on a rainy night to move to a new place.
Predators or Prey?
The are no known predators of the Amazon Horned Frog. The Amazon Horned Frogs are ambush predators and remain motionless until potential food comes nearby, at which time they lunge from their small hole in the ground and eat or attempt to eat whatever it is that’s in front of them. The Surinam horned frog is an opportunistic hunter, which means that it will eat just about anything that it can grab and swallow.
Diet
The Amazon Horned Frog is carnivorous. The species eats snails, lizards, other small frogs, mice, and even tadpoles of their own species.
Habitat
The Surinam horned frog lives in the Amazon Basin, which is a large, low area of northern South America. In this region, heavy rains, small creeks, and streams all eventually drain into Amazon River. It also can be found in the small countries of French Guiana, Guyana, and Suriname. During most of the year, the horned frog stays on land and among the thick plants of the rainforest floor. In the breeding season, however, it moves into small pools of water, which may or may not dry up later in the season.
Conservation
The World Conservation Union (IUCN) does not consider this species to be at risk. Some of the areas where this frog lives are protected places, such as refuges and parks, but some are not. As more forests are logged and otherwise cleared, this frog's habitat is shrinking.
Reproduction
The amazon horned frog usually mates in water.  The males initiate mating by calling to the females.  Once the animals are together, the male places the eggs on the female's back. It is the female's responsibility to find a suitable nesting area for her young.  These eggs will hatch in anywhere from 3 to 25 days. Females lay up to 1,000 eggs at a time, and wrap them around aquatic plants.