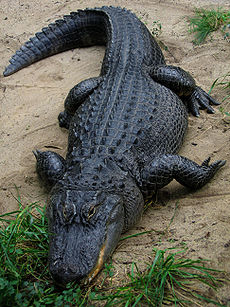 American Alligator range of location
Scientific Classification
Kingdom: Animalia
Phylum: Chordata
Class: Reptilia
(Unranked): Archosauria
Order: Crocodilia
Family: Alligatoridae
Genus: Alligator
Species: A. Mississippiensis
Binomial name: Alligator Mississippiensis
Description
Length: Male - 11.2 to 14.5 ft (3.4 to 4.4 m). Female - 8.2 to 9.8 ft (2.5 to 3.0 m).
Weight: 270 to 800 lb (120 to 360 kg), with the larger old males exceeding 1,000 lb (450 kg).Tail: The tail, which accounts for half of the alligator's total length, is primarily used for aquatic propulsion. The tail can also be used as a weapon of defense when an alligator feels threatened.
Feet: They have five claws on each front foot and four on each rear foot.
Other: Alligators travel very quickly in water and while they are generally slow-moving on land, alligators can lunge short distances very quickly. American Alligators have the strongest laboratory measured bite of any living animal, measured at up to 9,452 newtons (2,125 lbf) in laboratory conditions. Some alligators are missing an inhibited gene for melanin, which makes them albino. American Alligators can remain underwater for several hours if not actively swimming or hunting (then it is only about 20 minutes); they do this by rerouting blood to reduce circulation to the lungs, and thus the need for oxygen.
Behaviour
Large male alligators are solitary territorial animals. Smaller alligators can often be found in large numbers close to each other. The largest of the species (both males and females), will defend prime territory; smaller alligators have a higher tolerance of other alligators within a similar size class.
Predators or Prey?
American Alligators prey o a lot of smaller animals. Such animals are: fish, birds, turtles, snakes, mammals, amphibians, invertebrates, insects, larvae, snails, spiders, worms, and other small prey. Larger, older alligators will move on to larger fish, mollusks, frogs and small mammals like rats, and mice, raccoons and deer. Any living animal coming near to water is potential prey, such as boars, deer, dogs of all sizes, livestock including cattle and sheep, and are often known to kill and eat smaller alligators. In rare instances, large male alligators have been known to prey on young Florida panther and American black bear cubs.
Diet
Alligators eat fish, birds, turtles, snakes, mammals, and amphibians. Hatchlings diet on invertebrates, insects, larvae, snails, spiders, worms, and other small prey. They will also eat small fish at any opportunity. As they grow, they gradually move on to larger fish, mollusks, frogs and small mammals like rats, and mice. Some adult alligators take a larger variety of prey ranging from a snake or turtle to a bird and moderate sized mammals like a raccoon or deer.
Habitat
They are found in the U.S. states of North Carolina, South Carolina, Georgia, Florida, Louisiana, Alabama, Mississippi, Arkansas, Texas, and Oklahoma. Although primarily freshwater animals, alligators will occasionally venture into brackish water. Alligators live in wetlands and this is the vital habitat that holds the key to their continued long-term survival. American alligators are less susceptible to cold than American Crocodiles. Unlike the American Crocodile, which would quickly succumb to the cold and drown in water of 45 °F (7.2 °C), an alligator can survive in such temperatures for some time without apparent discomfort. It is thought that this adaptiveness is the reason why American alligators spread farther north than the American Crocodile. In fact, the American alligator is found farther from the equator and is more equipped to deal with cooler conditions than any other crocodilian.
Conservation
Historically, alligators were depleted from many parts of their range as a result of market hunting and loss of habitat, and 30 years ago many people believed their population would never recover. In 1967, the alligator was listed as an endangered species (under a law that preceded the Endangered Species Act of 1973), meaning it was considered in danger of extinction throughout all or a significant portion of its range.
Reproduction
The breeding season begins in the spring. The female builds a nest of vegetation, sticks, leaves, and mud in a sheltered spot in or near the water. After she lays her 20 to 50 white, goose egg-sized eggs, she covers them under more vegetation, which, like mulch, heats as it decays, helping to keep the eggs warm. This differs from Nile crocodiles who lay their eggs in pits. The female will remain near the nest throughout the 65-day incubation period, protecting the nest from intruders. When the young begin to hatch they emit a high-pitched croaking noise, and the mother quickly digs them out. The young are tiny replicas of adult alligators with a series of yellow bands around their bodies. They find their way to water after hatching. For several days they continue to live on yolk masses within their stomachs. The baby spends about five months with the mother before leaving her. Snapping turtles, snakes, raccoons, largemouth bass and American black bears prey upon the young. The adult alligator grows up to prey upon these same animals.