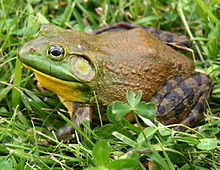 Scientific Classification
Kingdom: Animalia
Phylum: Chordata
Class: Amphibia
Order: Anura
Family: Ranidae
Genus: Rana
Species: R. Catesbeiana
Binomial name: Rana Catesbeiana
Description
Length: 3.5 to 6 inches (9 to 15 cm) long in body length.
Other: The bullfrog nervous system consists of a brain, spinal cord, and peripheral nerves including cranial nerves, spinal nerves, and sympathetic nerves serving organs such as the heart, gastrointestinal tract, kidneys, gonads. Females have an eardrum (tympanum) the same size as their eye. Males' eardrums are larger.
Behaviour
Subordinates often exhibit an array of tactics or behaviours that help them make the best of their low status. These alternative strategies include the sneaky mating tactics of subordinate male bullfrogs. Most  bullfrogs are considered to be placid animals, but recent observations have shown that some exhibit aggressive behaviours, especially at breeding time. Male bullfrogs and defend calling territories against intrusion by other males by kicking, bumping, and biting.
Predators or Prey?
Prey include rodents, small turtles, snakes, frogs, birds, bats, many invertebrates.
Diet
Stomach content studies going back to 1913 suggest the bullfrog preys on any animal it can overpower and stuff down its throat. Bullfrog stomachs have been found to contain rodents, small turtles, snakes, frogs—including bullfrogs, birds, even a bat, as well as the many invertebrates which are the usual food of ranid frogs.
Habitat
The American Bullfrog's habitat is swamps, ponds, lakes, where it is usually found along the water's edge. On rainy nights, bullfrogs along with many other amphibians, go overland and may be seen in numbers on country roads.
Conservation
The conservation of the American Bullfrog is very important. This is because the population of this species is very large. It is not endangered by humans, or by any other species of animal, or factor.
Reproduction
Fertilization is external in ranid frogs. In the mating grasp, or Amplexus, the male rides on top of the female, grasping her with his forelimbs posterior to her forelimbs. The female bullfrog deposits her eggs in the water and the male simultaneously releases sperm. Breeding begins in late spring or early summer. Males defend and call from territories, attracting females into a territory to mate. The call is reminiscent of the roar of a bull, hence the frog's common name. A female may produce up to 20,000 eggs in one clutch. The eggs grow into Tadpoles, which partially look like giant sperm. Eggs hatch in 3–5 days. Time to metamorphosis (change from tadpole to frog. In Butterflies, this would be a change from caterpillar to butterfly) ranges from a few months in the southern to 3 years in the northern parts of the geographic range.