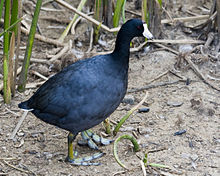 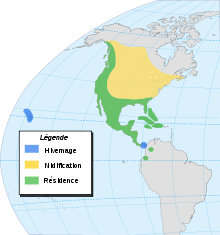 Scientific Classification
Kingdom: Animalia
Phylum: Chordata
Class: Aves
Subclass: Neornithes
Infraclass: Neognathae
Superorder: Neoaves
Order: Gruiformes
Family: Rallidae
Genus: Fulica
Species: F. americana
Binomial name: Fulica americana
Description
Length: About 16 in (40 cm)
Weight: About 1.4 lb (0.65 kg)
Other: Adults have a short thick white bill and white frontal shield, which usually has a reddish-brown spot near the top of the bill between the eyes. From up close, a dark band can be distinguished at the billtip. The body is grey with the head and neck darker than the rest of the body. Their legs are yellowish, with scalloped toes rather than webbed feet. Their chicks have black bodies with bright red head and beak, and orange plumes around the neck. The call is a high-pitched squeaking honk somewhat like a goose's but more hollow sounding.
Behaviour
American Coots are highly territorial during the breeding season, with both males and females fighting with neighbors to maintain a small territory where they obtain all their food. The females are known to lay eggs in neighbors' nests (conspecific brood parasitism); contrary to what one might expect, this behavior is more common among females that already have a nest than among those that were not able to secure a suitable territory for breeding in that season. Outside the breeding season, particularly in winter, they gather together in sometimes huge groups for protection and socializing. Groups of coots are called covers or rafts. These birds are frequently seen swimming in open water. They can dive for food but can also forage on land. These birds require a great deal of effort to become airborne, pedaling across the water with their feet before lifting off. The way in which their heads bob when they walk or swim has earned them the name "marsh hen"or "mud hen".
Predators or Prey?
American crows, black-billed magpies and forster's tern can sometime take eggs. Mammalian predators (including red foxes, coyotes, skunks and raccoons) are able to predate coot nests even more rarely, though nests are regularly destroyed in usurpation by muskrats. Regular, non-nesting-season predators include great horned owls, northern harriers, bald eagles, golden eagles, american alligators, bobcats, great black-backed and california gulls. The American Coot preys upon different insects.
Diet
The American Coot feeds on numerous organisms all depending on availability and location.  American Coots are omnivores meaning they feed on plants and insects.
Habitat
Their breeding habitat is marshes from southern Quebec to the Pacific coast of North America and as far south as northern South America. Birds from temperate North America east of the Rocky Mountains migrate to the southern United States and southern British Columbia. They are often year-round residents where water remains open in winter.
Conservation
The American Coot is common and widespread. Coot aren’t hunted nearly as much as ducks since many hunters consider them inedible. Some hunters shoot them for sport, particularly in Louisiana, California, Florida, Wisconsin, and Minnesota. In 1999 the annual harvest of coots in the U.S. was about 720,000. Because they live in wetlands, coots can accumulate toxins from pollution sources including agricultural runoff, industrial waste, and nuclear facilities. Because coots are so common and widespread, scientists sometimes monitor them as a way of monitoring these problems in the environment at large.
Reproduction
The nest is usually laid over water in marshlands. The nest is usually 2 to 3 ft (0.6 to 0.9 m) away from open water. The nest is also usually placed on a floating foundation of dry plants.All nests have a ramp that leads into the water, so the young have easier access when coming and going from the nest, which is cup-shaped. It's an aggregation of dead plant stems, lined with fine grass on a platform of aquatic vegetation. The platform is anchored to living plants. The female lays 8 to 12 pinkish, blackish-brown eggs. The incubation lasts about 21 to 25 days, by both parents. The young's down (feathers) are thick with long, fine hair-like tips above. The crown (top of the head) is bare and red. The skin around the young's eyes are blue, and the bill is red with a white tip. Also, the legs are black. At 49 to 56 days old (sometimes older), the young fledge and fend for themselves. Before fledging, the parents feed and defend the chicks, dividing the number of young between them. Sometimes, two broods are produced in a single season.