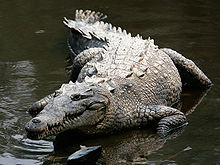 Facts
Conservation Status: Vulnerable
Location: From the Atlantic and Pacific coasts of southern Mexico to South America as far as Peru and Venezuela.
Lifespan: 60 to 70 years 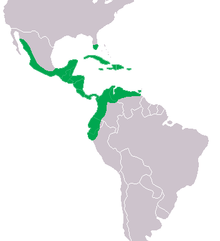 Scientific Classification
Kingdom: Animalia
Phylum: Chordata
Class: Reptilia
Order: Crocodilia
Family: Crocodylidae
Subfamily: Crocodylinae
Genus: Crocodylus
Species: C. acutus
Binomial name: Crocodylus acutus
Description
Newborn Length: Average 22 cm (8.7 in)
Newborn Weight: Average 60 g (2 oz)
Adult Length: Average 4 m (13 ft) in males. Average 3 m (8.9 ft) in females.
Adult Weight: Average 382 kg (840 lb) in males. Average 173 kg (380 lb) in females.
Running Speed: Up to 10 mph (16 km/h)
Swimming Speed: Up to 20 mph (32 km/h)
Other: Like all crocodilians, the American crocodile is a quadruped, with four short, splayed legs; a long, powerful tail; a scaly hide with rows of ossified scutes running down its back and tail. The snout is elongated and includes a strong pair of jaws. The eyes have nictitating membranes for protection along with lachrymal glands, which produce tears. The nostrils, eyes, and ears are situated on the top of its head, so the rest of the body can be concealed underwater for surprise attacks. Camouflage also helps them prey on food. American crocodiles normally crawl on their belly, but they can also "high walk". American crocodiles are more susceptible to cold than American alligators. Unlike the American alligator which can subsist in water of 7.2 °C (45.0 °F) for some time, an American crocodile would become helpless and drown. American crocodiles, however, have a faster growth rate than alligators, and are much more tolerant of salt water.
Behaviour
People rarely see American Crocodiles. They are not as aggressive as the Nile and Australian Crocodiles. Crocodiles can move with extreme speed for their size and can easily outrun or outswim a person.
Predators or Prey?
American crocodile prey can range in size from the insects taken by young crocodiles to cattle taken by large adults and includes birds, mammals, fish, turtles, crabs, snails, frogs, and occasionally carrion. The fully grown adult males of this species are capable of preying on virtually any animal unfortunate enough to be at the waters edge, although even at immense sizes fish still make up the vast majority of the crocodile's diet, and  have no natural predators.
Diet
American Crocodiles are carnivores, or meat eaters. They eat a variety of crabs, fish, waterfowl, and small mammals.
Habitat
The American Crocodile lives in quiet, warm waters either salt or brackish water. Brackish water is salt and fresh water mixed. Crocodiles require consistent tropical temperatures, hence their lack of distribution within the southern United States. They are saltwater-tolerant and have thus been capable of colonizing a multitude of islands within the Caribbean and on some coastal pacific islands as well. They co-exist with the smaller and less territorial American alligator within theEverglades National Park of southern Florida and with the very small Spectacled caiman within Central America. The only other crocodiles present within the American crocodile's range are the smaller and critically endangered Cuban Crocodile, along with the small Morelet's Crocodile in southern Mexico/Guatemala.
Conservation
Due to hide hunting, pollution, loss of habitat, and removal of adults for commercial farming, the American crocodile is endangered in parts of its range. In 1972, Venezuela banned commercial crocodile skin harvesting for a decade, as a result of 1950s and 1960s overhunting.

1,000 to 2,000 American crocodiles live in Mexico and Central and South America, but populations are data deficient. The American crocodile is considered a vulnerable species, but has not been assessed since 1996. It has an estimated wild population of 500 to 1,200 in southern Florida. On March 20, 2007, the United States Fish and Wildlife Service declassified the American crocodile as an endangered species, downgrading its status to "threatened"; the reptile remains protected from illegal harassing, poaching or killing under the federal Endangered Species Act. While not endangered, the American Alligator is also protected in the United States so that no crocodiles are killed by mistake.
Reproduction
In April or May, the female crocodile will build a nest of loose dirt in a mound by the water's edge and lay 35 to 50 eggs. She buries the eggs and fiercely guards her nest. When the eggs hatch in July or early August, the female helps carry her young to the water, but, unlike the alligator, she will not continue to care for her young.