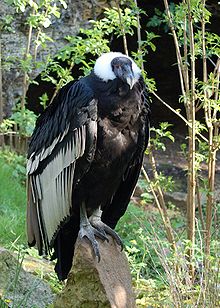 Stats
Conservation Status: Near Threatened
Location: Andes mountain range in South America
Lifespan: 50 to 60 years in the wild, up to 70 years in captivity. 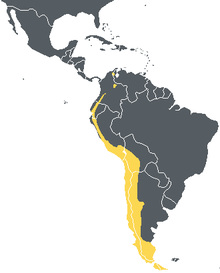 Scientific Classification
Kingdom: Animalia
Phylum: Chordata
Class: Aves
Order: Incertae sedis
Family: Cathartidae
Genus: Vultur
Species: V. Gryphus
Binomial name: Vultur Gryphus
Description
Length: 102 to 135 cm (40 to 53 in)
Weight: 11 to 15 kg (24 to 33 lb) for males and 6 to 14 kg (13 to 31 lb) for females
Wingspan: 280 to 320 cm (9.2 to 10.5 ft)
Others: The head and neck are red to blackish-red and have few feathers. Juveniles have a grayish-brown general coloration, blackish head and neck skin, and a brown ruff, while the adults have black feathers.
Behaviour
There is a well-developed social structure within large groups of condors, with competition to determine a 'pecking order' by body language, competitive play behavior, and vocalizations.
Predators or Prey?
Healthy adults have no natural predators, but large birds of prey and mammalian predators, like foxes, may take eggs or hatchlings. Andean Condors have many prey, really any animal that is found dead eg. roadkill.
Diet
The Andean Condor is a scavenger, feeding mainly on carrion. Wild condors inhabit large territories, often traveling more than 200 km (120 mi) a day in search of carrion. In inland areas, they prefer large carcasses, such as those of dead farm animals or wild deer, while their diet consists mainly of beached carcasses of marine mammals when near the coast. They will also raid the nests of smaller birds to feed on the eggs. Coastal areas provide a constant food supply, and in particularly plentiful areas, some Andean Condors limit their foraging area to several kilometers of beach-front land. They locate carrion by spotting it or by following other scavengers, such as corvids or other vultures.
Habitat
Its habitat is mainly composed of open grasslands and alpine areas up to 5,000 m (16,000 ft) in elevation. It prefers relatively open, non-forested areas which allow it to spot carrion from the air, such as the páramo or rocky, mountainous areas in general. It occasionally ranges to lowlands in eastern Bolivia and southwestern Brazil, descends to lowland desert areas in Chile and Peru, and is found over southern-beech forests in Patagonia.
Conservation
There are roughly about 10,000 mature individuals, and they are only Near Threatened. This means that the conservation of this species is not greatly important.
Reproduction
Sexual maturity and breeding behavior do not appear in the Andean Condor until the bird is five or six years of age. It may live to be 50 plus, and it mates for life. During courtship displays, the skin of the male's neck flushes, changing from dull red to bright yellow, and inflates. He approaches the female with neck outstretched, revealing the inflated neck and the chest patch, while hissing, then extends his wings and stands erect while clicking his tongue. Other courtship rituals include hissing and clucking while hopping with wings partially spread, and dancing. The Andean condor prefers to roost and breed at elevations of 3,000 to 5,000 m (9,800 to 16,000 ft). Its nest, which consists of a few sticks placed around the eggs, is created on inaccessible ledges of rock. However, in coastal areas of Peru, where there are few cliffs, some nests are simply partially shaded crannies scraped out against boulders on slopes. It deposits one or two bluish-white eggs, weighing about 280 g (9.9 oz) and ranging from 75 to 100 mm (3.0 to 3.9 in) in length, during the months of February and March every second year. The egg hatches after 54 to 58 days of incubation by both parents. If the chick or egg is lost or removed, another egg is laid to take its place. Researchers and breeders take advantage of this behavior to double the reproductive rate by taking the first egg away for hand-rearing, causing the parents to lay a second egg, which they are generally allowed to raise.

The young are covered with a grayish down until they are almost as large as their parents. They are able to fly after six months, but continue to roost and hunt with their parents until age two, when they are displaced by a new clutch. Healthy adults have no natural predators, but large birds of prey and mammalian predators, like foxes, may take eggs or hatchlings. There is a well-developed social structure within large groups of condors, with competition to determine a 'pecking order' by body language, competitive play behavior, and vocalizations.