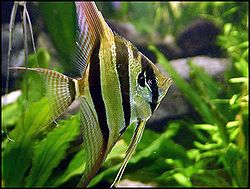 Facts
Also known as: Pterophyllum
Location: Amazon River, Orinoco River, and Essequibo River basins in tropical South America
Lifespan: 10 years
Scientific Classification
Kingdom: Animalia
Phylum: Chordata
Class: Actinopterygii
Order: Perciformes
Family: Cichlidae
Subfamily: Cichlasomatinae
Tribe: Heroini
Genus: Pterophyllum
Binomial name: Pterophyllum altum, Pterophyllum leopoldi, Pterophyllum scalare (different subspecies)
Description
Subspecies: The most commonly kept species in the aquarium is Pterophyllum scalare. Most of the individuals the aquarium trade are captive-bred. Sometimes, Pterophyllum altum is available. Captive bred P. altum is available but occasionaly. Pterophyllum leopoldi is the hardest to find in the trade.
Other: The three species of Pterophyllum are unusually shaped for cichlids being greatly laterally compressed, with round bodies and elongated triangular dorsal and anal fins. This body shape allows them to hide among roots and plants, often on a vertical surface. Naturally occurring angelfish are frequently striped longitudinally, colouration which provides additional camouflage.
Behaviour
A pair will mate for life. If their partner dies, they will refuse to mate with another angelfish. Therefore, the Angelfish are social animals.
Predators or Prey?
Angelfish are ambush predators and prey on small fish and macro-invertebrates.
Diet
These fish eat even smaller fish, and macro-invertebrates.
Habitat
These fish live in fresh water lakes and rivers. The Angelfish originated in the Amazon River, Orinoco River, and Essequibo River basins in tropical South America. Therefore, the water is warm and full of life (prey).
Conservation
A lot of pet shops and aquariums have Angelfish. They are bred in fish tanks, and kept until customers buy them.
Reproduction
Angelfish pairs form long-term relationships where each individual will protect the other from threats and potential suitors. Upon the death or removal of one of the mated pair, breeders have experienced both the total refusal of the remaining mate to pair up with any other angelfish and successful breeding with subsequent mates.

Depending upon aquarium conditions, P. scalare reaches sexual maturity at the age of six to twelve months or more. In situations where the eggs are removed from the aquarium immediately after spawning, the pair is capable of spawning every seven to ten days. Around the age of approximately three years, spawning frequency will decrease and eventually cease.