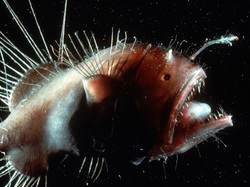 Scientific Classification
Kingdom: Animalia
Phylum: Chordata
Class: Actinopterygii
Subclass: Neopterygii
Infraclass: Teleostei
Order: Lophiiformes
Description
The Angler fish is a fish that lives in salt water oceans. The species lives down deep under the surface, where there is barely any light at all. The males are about 20 times smaller than the females. This is because the males are almost completely just sperm.
Behaviour
The male Angler fish behaves in a certain way for one purpose. This purpose is to reproduce more Angler Fish. The males do this by biting into her skin, and releases an enzyme that digests the skin of his mouth and her body. The male loses all of his organs until only the sperm are left. This behaviour is unique as no other discovered animals show this same behaviour.
Predators or Prey?
The spine is movable in all directions, and the esca can be wiggled so as to resemble a prey animal, and thus to act as bait to lure other predators close enough for the anglerfish to devour them whole. The jaws are triggered in automatic reflex by contact with the tentacle.
Diet
The diet of anglerfish consists mostly of other fish, although some species consume marine invertebrates. For example, batfish, anglerfish with free flaps of skin, also eat marine snails, clams, crustacean, and worms; deep-sea anglers of the family Melanocetidae consume cope-pods and arrow worms in addition to fish.
Habitat
The Angler Fish live in the deep sea, so deep that almost no sunlight comes through the water. This helps the Angler Fish to search for prey. They live in salt water, so the salt levels in their bodies are lower that in the sea. Being deep below the sea surface means that the water is very dense on the fish. The Angler  Fish need no air holes, otherwise they will literally crack under the pressure.
Conservation
The Angler fish are listed as "outside safe biological limits". Additionally, anglerfish are known to occasionally rise to the surface during 'El Niño', leaving large groups of dead Anglerfish floating to the surface. 'El Niño' is a climate pattern that occurs over the Pacific Ocean. It is where the temperature massively increases or decreases. The Angler fish then die and are found floating on the sea's surface at shore. Therefore, at certain times of the year,  the conservation of the Angler fish is more important than others.
Reproduction
When scientists first started capturing ceratioid anglerfish, they noticed that all of the specimens were females. These individuals were a few centimetres in size and almost all of them had what appeared to be parasites attached to them. It turned out that these "parasites" were highly reduced male Ceratioids. At birth, male ceratoids are already equipped with extremely well developed olfactory organs that detect scents in the water. When he finds a female, he bites into her skin, and releases an enzyme that digests the skin of his mouth and her body, fusing the pair down to the blood-vessel level. The male then slowly atrophies, first losing his digestive organs, then his brain, heart, and eyes, and ends as nothing more than a pair of gonads, which release sperm in response to hormones in the female's bloodstream indicating egg release. This extreme sexual dimorphism ensures that, when the female is ready to spawn, she has a mate immediately available. Multiple males can be incorporated into a single female.