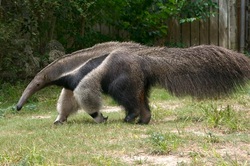 Facts
Also known as: Giant Anteater, Ant Bear
Conservation Status: Near Threatened
Location: South and Central America
Lifespan: 15 years in the wild. 26 years in captivity.
Scientific Classification
Kingdom: Animalia
Phylum: Chordata
Class: Mammalia
Superorder: Xenarthra
Order: Pilosa
Suborder: Vermilingua
Description
Length: about 1.8 m (6 ft) long including the tail.
Other: It has a long, thin head and a large, bushy tail. Its prevailing color is gray, with a broad black band, bordered with white, starting on the chest, and passing obliquely over the shoulder, diminishing gradually in breadth as it approaches the loins, where it ends in a point. Giant Anteaters are sometimes mistaken for bears because of their claws and bushy fur.
Behaviour
The Giant Anteater is a very solitary animal. This means that it will not interact with any other animals, including other Anteaters. There is an exception for mating season, when the Anteaters meet together to find mating pairs.
Predator or Prey?
Using the long, sharp claws on their forelimbs, they open insect colonies and tree trunks. They then use the tongue to collect the eggs, larvae, and adult insects. The salivary glands secrete sticky saliva during feeding that coats the tongue. They only stay at one ant colony for a short period of time to avoid soldier ants, but giant anteaters can consume a few thousand insects in minutes. The tongue is attached to the sternum and moves very quickly, flicking 150 times per minute.
Diet
Anteaters eat ants, termites, soft-bodied grubs, eggs, larvae, and adult insects. They will also eat fruit and birds' eggs on occasion
Habitat
The anteater is extensively distributed in South and Central America, frequenting low swampy savannas, along the banks of rivers, and the depths of the humid forests, but is nowhere abundant.
Conservation
The Conservation Status of the Anteater is of Near Threatened. This means that there should be a higher population of this species than there is at present.
Reproduction
The female produces one offspring per birth. During much of its first year of life, a young Anteater will ride on its mother's back. A baby that has fallen off his mother's back will grunt to its mother either to remind her that it has fallen off or to simply instruct her where it is or to get her attention.