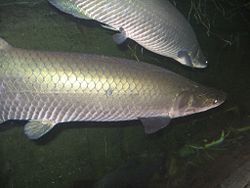 Facts
Also known as: Pirarucu, Paiche
Conservation Status: Vulnerable
Location: South America (fresh water)
Lifespan: 15 to 20 years
Scientific Classification
Kingdom: Animalia
Phylum: Chordata
Class: Actinopterygii
Order: Osteoglossiformes
Family: Osteoglossidae
Subfamily: Heterotidinae
Genus: Arapaima
Species: A. gigas
Binomial name: Arapaima gigas
Description
Length: More than 2m (6.6 ft)
Weight: More than 100 kg (220 lb)
Other: The Arapaima displays a distinctive vibrant crimson colour throughout the tail section of its armour plated body further adding to the striking and most impressive  appearance of these freshwater giants.
Behaviour
A keen and patient hunter, will prey on smaller fish. In the wild they inhabit floodplains in the Amazon, where the waters are low on oxygen, and gulp air from the surface, quite loudly that can be heard from a fair distance away. They have gills but these are often only used while juvenile, once mature they will predominantly breathe from the surface every 15 minutes or so.
Predators or Prey?
This fish is air-breathing fish that surface every 10–20 minutes. This behavior makes it an accessible target for harpoon fishermen.  TheArapaima gigas is an important protein source in the diet of people living along the river,  but large pirarucu have become less common in some areas, owing to over fishing. The Arapaima gigas or Pirarucu is the ultimate freshwater predator and actively hunts both live and dead prey fish. The Arapaima feeds both in the upper layers where it aggressively targets live prey fish, reptiles, frogs and on occasion even birds and monkeys whilst also prowling the muddy substrate and opportunistically scavenging on various remains of an assortment of live and dead prey items.
Diet
The diet of the arapaima consists of fish, crustaceans, and other small animals.
Habitat
The Arapaima gigas in its natural habitat swims in some of the wildest waters on the planet which endures seasonal flooding in the monsoon season causing the mighty Amazon River and its tributaries to swell and invade the surrounding jungles. With the offset of the dry season the water levels recede rapidly leaving landlocked pools alongside the mighty river.
Conservation
The arapaima is becoming rare. It is still not endangered, but may well be on its way.
Reproduction
Due to the geographic range that arapaima inhabit, the animal's life cycle is greatly affected by the seasonal flooding that occurs. The arapaima lays its eggs during the months when the water levels are low or beginning to rise. They build a nest approximately 50 cm wide and 15 cm deep, usually in muddy bottomed areas. As the water rises the eggs hatch and the offspring have the flood season to prosper, during the months of May to August. Therefore, the yearly spawning is regulated seasonally. The arapaima male is supposed to be a mouthbrooder, meaning the young are protected in its mouth until they are older. The female arapaima helps to protect the male and the young by circling them and fending off potential predators.