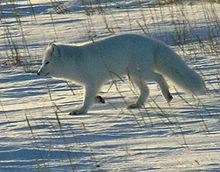 Scientific Classification
Kingdom: Animalia
Phylum: Chordata
Class: Mammalia
Order: Carnivora
Family: Canidae
Genus: Vulpes
Species: V. lagopus
Binomial name: Vulpes Lagopus
Description
Average length: Male - 85.3cm (33.6 in). Female - 82.1cm (32.3 in).
Tail length: Male - 31cm (12.2 in). Female - 30cm (11.8 in).
Height (at shoulder): 25 to 30 cm (9.8 to 11.8 in).
Average weight: Male - 3.5 kg (7.7lb). Female - 2.9 kg (6.4lb).
Other: The Arctic Fox has thick, white fur, which helps to keep camouflage against the snow and ice. In the warmer seasons, the Arctic Fox's fur changes colour to a darker grey-brown.
Behaviour
Arctic fox communicate by barking. They rarely communicate with each other except during mating season. When the arctic fox is sleeping, it protects its nose from the cold by curling its bushy tail around its body. The arctic fox is nomadic, it moves from place to place looking for food. In the summer they live in family groups made up of a male, one or two females and the kits. The second female is a leftover kit from the year before, she doesn't breed. She helps care for the young.
Predators or Prey?
The prey of the Arctic Fox are Lemmings, Hares, Owls, Eggs, Carrions, Ringed Seal Pups, (and Faeces if food is scarce). Predators include Polar Bears, Wolves, and Golden Eagles to the cubs.
Diet
The Arctic Fox will generally eat any small animal it can find: lemmings, hares, owls, eggs, and carrion, etc. Lemmings are the most common prey. A family of foxes can eat dozens of lemmings each day. During April and May the Arctic Fox also preys on Ringed Seal pups when the young animals are confined to a snow den and are relatively helpless. Fish beneath the ice are also part of its diet. If there is an overabundance of food hunted, the Arctic Fox will bury what the family cannot eat. When its normal prey is scarce, the Arctic Fox scavenges the leftovers and even faeces of larger predators, such as the polar bear, even though the bear's prey includes the Arctic Fox itself.
Habitat
Arctic Foxes have been found living in Northern and western Alaska and Canada Northern Canada south to northern Northwest Territories, northeast Alberta, northern Manitoba, northern Quebec, Russia, and Greenland; a few records indicate presence farther south. These countries are very cold. The habitat is mainly ice and snow.
Conservation
The Conservation Status of the Arctic Fox is of Least Concern. This means that there is a large population of Arctic Foxes, and that conservation in zoos and captivity are not really needed.
Reproduction
The Arctic Fox tends to be active from early September to early May. The gestation period is 53 days. Litters tend to average 5-8 pups but may be as many as 25. Both the mother and the father help to raise their young. The females leave the family and form their own groups and the males stay with the family.

Foxes tend to form monogamous pairs in the breeding season. This means that the pair will stay together with only one partner. Litters are born in the early summer and the parents raise the young in a large den. Dens can be complex underground networks, housing many generations of foxes. Young from a previous year's litter may stay with the parents to help rear younger siblings. The kits are initially brownish; as they become older they turn white.