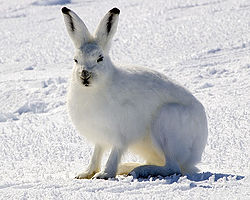 Facts
Also known as: Polar Rabbit
Conservation Status: Least Concern
Location: The Tundra regions of Greenland and the northernmost parts of Canada as well as Alaska
Lifespan: About 5 years

Scientific Classification
Kingdom: Animalia
Phylum: Chordata
Class: Mammalia
Order: Lagomorpha
Family: Leporidae
Genus: Lepus
Species: L. arcticus
Description
Length: 55-70 cm (22-28 in)
Weight: 4-5.5 kg (9-12 lbs)
Behaviour
In winter, hares typically rest together in closely spaced groups. Arctic hares do not huddle together for warmth, except for young littermates in summer. Hares in groups do not usually seek shelter, but solitary hares will groom and rest in the shelter of large rocks, snowdrifts, and manufactured structures such as cabins.
Predators or Prey?
The Arctic Hare's main predators are the Arctic fox, the weasel, snowy owl, and the lynx. Because hares provide food and fur for people, they are often killed by hunters. The Arctic Hare has no prey because it does not feed on animals.
Diet
Arctic hares eat mainly woody plants but also dine on buds, berries, leaves and grasses. In the early summer they eat purple saxifrage. It has a keen sense of smell and may dig for willow twigs under the snow. When eating plants, arctic hares like standing where there is less snow to easily locate twigs or plants that fall off or lie on the ground for them to chew on/feed on. Although hares are known for eating plants, they can eat meat.
Habitat
The arctic hare is distributed over the tundra regions of Greenland and the northernmost parts of Canada as well as Alaska. In the far north the hare becomes white during the winter to blend with the snow, similar to the ptarmigan. During the summer months the body and head of the hare turns a gray-brown, to blend in with the mud and rocks, while the legs remain white.
Conservation
Conservation is not needed for Arctic Hares because the animal's conservation status is of least concern. This is why Arctic Hares are rarely seen in captivity.
Reproduction
Female hares can have up to eight baby hares called leverets. The leverets stay within the mother's home range until they are old enough to survive on their own. The babies weigh 2 to 4 ounces at birth. The babies are born with their eyes wide open and they are born fully haired and advanced to hop about a few minutes after birth. Each soon develops their own form and is visited by the doe to be suckled.