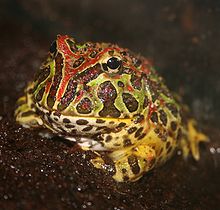 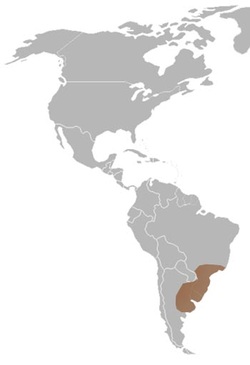 Scientific Classification
Kingdom: Animalia
Phylum: Chordata
Class: Amphibia
Order: Anura
Family: Leptodactylidae
Genus: Ceratophrys
Species: C. ornata
Binomial name: Ceratophrys ornata
Description
Length: Male - Average 10 cm (3.9 in). Female - Average 14 cm (5.5 in)
Other: The Horned frogs' most prominent feature is its mouth, which accounts for roughly half of the animal's overall size. Coloration is typically bright green with red markings, though dark green, parti-color black and albino versions also exist. Sexing this species is very difficult, and the only dimorphism between the two sexes is size and that males have dark pigmented throats.
Behaviour
There is a belief in Argentina that if an Ornate horned frog bites the lip of a grazing horse, the horse will die from the bite. No poison exists in the mouth of this frog, and it has probably earned this bad reputation by its extreme aggressiveness and its willingness to attack an animal many times its own size and bulk. Horned frogs like to burrow in the moss after a good meal. Their extremely wide mouths and steel-trap jaws are certainly useful in subduing prey larger than the beetles and other small invertebrates that are customary food of the majority of other kinds of frogs. They rarely move about, preferring to lie in wait for prey. When threatened they are surprisingly fearless and aggressive, even jumping toward the enemy and biting. Their vocalization sounds similar to bovine bellowing.
Predators or Prey?
The Argentine Horned Frog has no known main predators. Horned frogs hunt by remaining motionless, and waiting for prey. They will try to eat anything that can fit in their mouths, and some things that can't. In the wild, their typical diet would include rodents such as mice, small reptiles, as well as large spiders and insects such as locusts.
Diet
They are very voracious eaters and they sit and wait for food to come to them. They swallow their prey whole and their diet mainly consists of insects, small birds, lizards, frogs, and small mammals.
Habitat
They are found in the woodlands of South America near areas with shallow water. During the year when the temperatures are cooler, they will spend most of their time buried underground.
Conservation
They are not legally protected. As a small predator, one of the ornate horned frog’s roles is to control populations of smaller animals. As tadpoles and adults, horned frogs are of course a source of food for other animals as well.
Reproduction
During the breeding season, males will call out to females. 1000 to 2000 eggs are laid and attached to vegetation in shallow water. When the tadpoles hatch, they are carnivorous and they will eat live worms. After about one month, they will begin to turn in to small frogs.