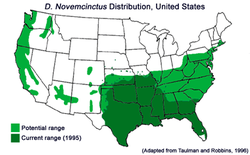 Scientific Classification
Kingdom: Animalia
Phylum: Chordata
Class: Mammalia
Infraclass: Eutheria
Superorder: Xenarthra
Order: Cingulata
Description
Length: Average 150 cm (60 in)
Weight: Average 59 kg (130 lb)
Other: Armadillos in general have low body temperatures (33–36 °C) and basal metabolic rates (from 40–60% of that expected in a placental mammal of their mass). Armadillos have poor vision, but large eyes. The armor is formed by plates of dermal bone covered in relatively small, overlapping epidermal scales called "scutes", composed of bone with a covering of horn. In most species, there are rigid shields over the shoulders and hips, with a number of bands separated by flexible skin covering the back and flanks. Additional armor covers the top of the head, the upper parts of the limbs, and the tail. The underside of the animal is never armored, and is simply covered with soft skin and fur. Armadillos have short legs but can move quite quickly, and have the ability to remain underwater for as long as six minutes. Because of the density of its armor, an armadillo will sink in water unless it inflates its stomach and intestines with air, which often doubles its size and allows it to swim across narrow bodies of water.
Subspecies
† indicates extinct taxon
Behaviour
Armadillos are solitary, largely nocturnal animals that come out to forage around dusk. They are extensive burrowers, with a single animal sometimes maintaining up to 12 burrows on its range. These burrows are roughly 8 inches (20 cm) wide, 7 feet (2.1 m) deep, and 25 feet (7.6 m) long. Armadillos mark their territory with urine, feces, and excretions from scent glands found on the eyelids, nose, and feet. Females tend to have exclusive, clearly defined territories. Males have larger territories, but theirs often overlap, and can coincide with the ranges of several females. Territorial disputes are settled by kicking and chasing. When they are not foraging, armadillos shuffle along fairly slowly, stopping occasionally to sniff the air for signs of danger. If alarmed, they can flee with surprising speed. If this method of escape fails, the armadillo may quickly dig a shallow trench and lodge itself inside. Predators are rarely able to dislodge the animal, and abandon their prey when they cannot breach the armadillo’s armor.
Predators or Prey?
The Armadillos predators are mainly big cats and coyotes. The species is also eaten by some humans. The Armadillos prey are insects, which includes grubs beetles, ants, termites, and worms.
Diet
Armadillos are generally insectivores. They forage for meals by thrusting their snouts into loose soil and leaf litter and frantically digging in erratic patterns, stopping occasionally to dig up grubs, beetles, ants, termites, and worms, which their sensitive noses can detect through 8 inches (20 cm) of soil. They then lap up the insects with their sticky tongue. They supplement their diet with amphibians, small reptiles, fungi, tubers, and carrion.
Habitat
Armadillos prefer to build burrows in moist soil near the creeks, streams, and arroyos near which it generally lives and feeds.
Conservation
The giant armadillo and pink fairy armadillo are Endangered, facing a very high risk of extinction, or dying out, according to the World Conservation Union (IUCN). The main threat is habitat loss as trees are cut down. The use of land for farming reduces fairy armadillo habitat and development has cut into the amount of giant armadillo habitat. Furthermore, domestic dogs kill small armadillos, and people hunt giant armadillos for their meat. Four other armadillo species are Vulnerable, facing a high risk of extinction in the wild.
Reproduction
Mating takes place during a 2–3 month long mating season, which occurs from July–August in the Northern Hemisphere and November–January in the Southern Hemisphere. A single egg is fertilized, but implantation is delayed for 3–4 months to ensure the young will not be born during an unfavorable time. Once the zygote does implant in the uterus, there is a gestation period of four months during which the zygote splits into four identical embryos, which each develop their own placenta so blood and nutrients are not mixed between them. After birth, the quadruplets remain in the burrow, living off the mother’s milk for approximately three months. They then begin to forage with the mother, eventually leaving after six months to a year. Nine-banded armadillos reach sexual maturity at the age of one year, and reproduce every year for the rest of their 12–15 year lifespan. A single female can produce up to 56 young over the course of her life. This high reproductive rate is a major cause of the species’ rapid expansion.