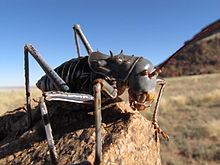 Facts
Also known as: Armoured Bush Cricket, Corn Cricket, Koringkrieke
Conservation Status: Unknown
Location: Namibia, Botswana, and South Africa
Lifespan: Unknown (although house crickets only live for a few weeks)
Scientific Classification
Kingdom: Animalia
Phylum: Arthropoda
Class: Insecta
Order: Orthoptera
Superfamily: Tettigonioidea
Family: Tettigoniidae
Genus: Acanthoplus
Species: A. discoidalis
Binomial name: Acanthoplus discoidalis
Description
Length: Average 5 cm (3 inches)
Other: The full grown insect was nearly three inches long. They have sharp spines across their thorax and legs and a pair of strong biting jaws.
Behaviour
The Armoured Ground Cricket have several defensive mechanisms that they use when attacked, as well as the innate defence provided by their armoured exoskeleton. The mechanism used depends on the sex of the individual and the method of attack. When attacked from the side, males will stridulate (rubbing legs together to produce sounds) and both sexes will attempt to bite the attacker. In around 50% of attacks from the side, both sexes will autohaemorrhage, squirting between 5 mg and 80 mg of toxic haemolymph at their attacker over distances up to 30 cm.
Predators or Prey?
The Armoured Ground Cricket  is tough and covered with sharp spines (as the name might suggest), but it also squirts blood and vomits when attacked. The blood smells (and probably tastes) nasty, and it seems to be an effective way of escaping predators such as lizards. The Armoured Ground Cricket preys up on birds' nestlings, but are also known to prey up on many other different prey.
Diet
The Armoured Ground Cricket are omnivorous and will eat many different foods. One record documented them attacking Red-billed Quelea nestlings. It is believed that they may be able to detect the location of nests using auditory signals.
Habitat
The Armoured Ground Cricket habitats in deserts and in savannahs.
Conservation
The Armoured Ground Cricket's population is possibly under threat. This is because the species are pests in Southern Africa and can cause decreases in yield of up to 40% in these crops in some years. People attempt to exterminate this species in certain ways; Insecticides can be used, but as the species are flightless they can be controlled fairly easily by constructing a 50 cm deep trench around the field, poisoned baits can also be placed in the trenches. It has been suggested that the crickets could also be used as high protein chicken feed.
Reproduction
The Armoured Ground Cricket have a relatively long courtship period, it starts at sunset and is usually completed by sunrise. Males stridulate which attracts females to their location. Males produce a large sperm pouch and an associated spermatophylax (a body of food given to the female as a nuptial gift) - together termed the spermatophore. They therefore cannot mate again for some time as they have to wait until a new spermatophore has grown. Females mate once before laying eggs, and then mate and lay eggs in a random order. This means that it is advantageous for males to mate with virgins over non-virgins as a higher proportion of the offspring will be their own. Males are able to discriminate between virgins and non-virgins and successfully complete more matings with virgins and they transfer their spermatophore more quickly when mating with virgins. Virgins are lighter than non-virgins allowing males to distinguish between virgins and non-virgins by determining the mass of the female when they copulate.