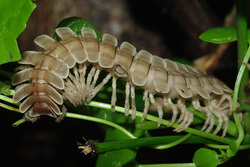 Facts
Conservation Status: Least Concern
Location: United States and Tropical Forests
Lifespan: 1 to 10 years
Scientific Classification
Kingdom: Animalia
Phylum: Arthropoda
Subphylum: Myriapoda
Class: Diplopoda
Description
Length: 8 inches
Other: The Armoured Millipede is nocturnal. This means that the Millipede sleeps during the day, and forages and eats during the night. There are 8,000 different species of Millipede around the world.
Behaviour
Because Armoured Millipedes move slowly, they are vulnerable to attack. As a result, they have developed several means of defense. One defense is the armour itself. Many species curl up into a ball when attacked. Some species become as large as a golf ball. Another defense is poison glands. In most cases the poison is constantly secreted to give the Millipede a toxic coating. Some larger species can spray their poison as far as three feet. Other defenses include bright markings to warn off predators. A millipede that lives in the Sequoia Forests of California is even luminous.
Predators or Prey?
Ants and other insects are predators to the Armoured Millipedes. Capuchin Monkeys have been known to irritate the Millipedes so that they will excrete a venom onto the monkeys' skin. The monkeys do this because the venom repel mosquitoes. Armoured Millipedes have no prey as they are herbivores. They eat dead plant material that has fallen to the ground.
Diet
Unlike Centipedes, with which they are often confused, Armoured Millipedes do not hunt living creatures. Instead, they eat leaves and other matter that fall from trees and decay on the ground in their tropical forest habitat. Millipedes may also attack crops planted by humans. But they are unlikely to be a principle source of damage. Their jaws are simply not strong enough to pierce anything that is not already damaged or decaying.
Habitat
Armoured Millipedes push their way through soil and decaying vegetation with ease. Under piles of leaf mold or in damp crevices, Millipedes can be found resting by day or feeding at night. There are also some species that climb trees to find on vegetable matter caught in the branches.
Conservation
Armoured Millipedes are not directly threatened, but like in other inhabitants of tropical forests, they are at risk from the continued destruction of their habitat.
Reproduction
Armoured Millipedes may mate for several hours. The male winds around the female and holds her with his front legs. Fertilization occurs within the females' body. Depending on the species, she may lay up to 300 eggs. Unlike earthworms and most insects, many Millipedes tend their eggs. Some disguise their eggs by coating them with excrement. Other build an intricate nest and coil themselves around the eggs. Various kinds of nests are built. The usual materials are soil and excrement, although some Millipedes spin a nest of a silk-like sunstance. When it hatches, the Armoured Millipede may only have a fraction of the adult number of legs. It gains more legs every time it molts, or sheds its hard, outer shell. After elaborate leg waving courtship rituals, Millipeds may mate for many hours.