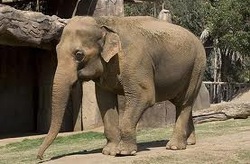 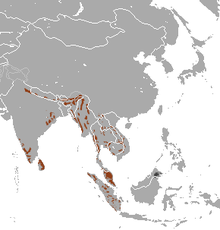 Scientific Classification
Kingdom: Animalia
Phylum: Chordata
Class: Mammalia
Order: Proboscidea
Family: Elephantidae
Genus: Elephas
Species: E. Maximus
Binomial name: Elephas  Maximus
Description
Weight: Male - up to 5,400 kg (12,000 lbs). Female - up to 4,160 kg (9200 lbs).
Height: Male - 3.2 m (10 ft) at shoulder. Female - 2.54 m (8.3 ft) at the shoulder.
Trunk: Elephants use their trunks for feeding, watering, dusting, smelling, touching, breathing, sound production, communication, washing, pinching, grasping, defense, and offense. It consists of 100,000 muscles, and can hold 8.5 litres.
Tusks: Tusks serve to dig for water, salt, and rocks, to debark trees, as levers for maneuvering fallen trees and branches, for work, for display, for marking trees, as weapon for offense and defense, as trunk-rests, as protection for the trunk. They are known to be right or left tusked.
Behaviour
Bull elephants are male and may form small groups known as 'bachelor herds', but bulls may also roam independently at various times. Bulls will fight one another to get access to estrous females. Males reach sexual maturity around age 12–15 (younger in captivity). Between the age of 10 to 20 years, bulls undergo an annual phenomenon known as "musth". This is a period where the testosterone level is high (up to 100 times greater than non-musth periods) and they become extremely aggressive. Secretions containing pheromones occur during this period, from the paired temporal glands located on the head between the lateral edge of the eye and the base of the ear. Female elephants live in small groups. They have a matriarchal society, and the group is led by the oldest female. The herd consists of relatives.
Predators or Prey?
Baby or young Asian elephants have predators such as Tigers. Asian Elephants do not have any prey as they are herbivores. This means they only eat plants.
Diet
They eat 10% of their body weight each day, which for adults is between 170 and 200 kilograms of food per day. They need 80–200 litres of water a day and use even more for bathing. At times they scrape the soil for minerals and occasionally will eat their own faeces if hungry.
Habitat
Asian elephants inhabit grasslands, tropical evergreen forest, semi-evergreen forest, moist deciduous forest, dry deciduous forested and dry thorn forest, in addition to cultivated and secondary forests and scrublands. Over this range of habitat types elephants are seen from sea level to over 3,000 m (9,800 ft). In the Eastern Himalaya in northeast India, they regularly move up above 3,000 m (9,800 ft) in summer at a few sites.
Conservation
Since 1986, Elephas maximus has been listed as endangered by IUCN as the population has declined by at least 50% over the last three generations, estimated to be 60–75 years. The species is pre-eminently threatened by habitat loss, degradation and fragmentation. In 2003, the wild population was estimated at between 41,410 and 52,345 individuals.
Reproduction
An individual reaches sexual maturity at 9–15 years of age. The gestation period is 18–22 months, and the female gives birth to one calf, or occasionally twins. The calf is fully developed by the 19th month but stays in the womb to grow so that it can reach its mother to feed. At birth, the calf weighs about 100 kg (220 lb), and is suckled for up to 2–3 years. Once a female gives birth, she usually does not breed again until the first calf is weaned, resulting in a 4–5-year birth interval. Females stay on with the herd, but mature males are chased away.

Females produce sex pheromones; a principal component thereof, (Z)-7-dodecen-1-yl acetate, has also been found to be a sex pheromone in numerous species of insects.