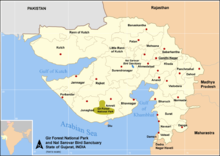 Scientific Classification
Kingdom: Animalia
Phylum: Chordata
Class: Mammalia
Order: Carnivora
Family: Felidae
Genus: Panthera
Species: P. leo
Subspecies: P. l. persica
Trinomial name: Panthera leo persica
Description
Skull length: Males - 330 to 340 mm. Females - 266 to 277 mm.
Body length: Males - 1.7 to 2.5 m. Females - 1.4 to 1.75 m.
Weight: Males - 160 to 190 kg. Females - 110 to 120 kg.
Other: Asiatic lions are similar to African forms, though they have less swollen tympanic bullae, shorter postorbital constriction (narrow skull), and usually have divided infraorbital foramen. The colour ranges from reddish-brown to a highly mottled black to sandy cinnamon grey.
Behaviour
Asiatic lions are highly social animals, living in units called prides. Their lion prides are smaller than those of African lions, with an average of only two females, whereas an African pride has an average of four to six. The Asiatic males are less social and only associate with the pride when mating or on a large kill. It has been suggested that this may be because their prey animals are smaller than those in Africa, requiring fewer hunters to tackle them.
Predators or Prey?
The Asian Lion has no natural predators, apart from humans; increasing human population and destruction of habitat. Females carry out most of the hunting and prey upon deer, antelope, wild boar and buffalo.
Diet
Like all wild cats, the Asian lion is a carnivore. The typical diet of the Asian lion is deer, antelope, wild boar and buffalo.
Habitat
Modern habitat of the Asiatic lion is largely limited to the Gir Forest sanctuary in North Western India.
Conservation
Asian lions are classed as critically endangered animal. Official protection by the imperial government was given in 1900, however, with increasing human population, overgrazing, and destruction of forest cover, suitable habitat was reduced to about 1,300 square kilometres. In 1957, three African lions, hardly different from their Asian relatives, were released in the Gir Forest sanctuary. Their increase has indicated that such an approach may ensure the continued existence of the lion in Asia. About 85 Asian lions survive in captivity. These Indian big cats lost most of their open jungle and grassland habitat in India to the rising human population which almost completely converted their entire habitat in the plains of India into farmland. They frequently became targets of local and British colonial hunters.The population in 1907 was believed to consist of only 13 lions when the Nawab of Junagadh gave them complete protection. This figure however is highly controversial because the first census of lions in the Gir that was conducted in 1936 yielded a result of 234 animals.
Reproduction
Mating is not seasonal and takes place all year round. Male Asian lions reach sexual maturity at around 5 years old and female Asian lions reach sexual maturity earlier at around 4 years old. The gestation period last for between 100 - 119 days after which 1 - 6 cubs are born. Intervals between births can be 18 - 26 months. The cubs start eating meat at about 3 months of age while continuing to suckle for up to 6 months. They spend 9 months perfecting their hunting skills, become independent aged one and reach maturity at 3 to 4 years. Cub mortality is high, up to 80% may die before 2 years of age.