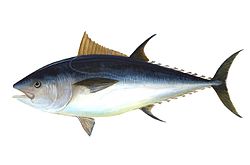 Facts
Also known as: Northern Bluefin Tuna, Giant Bluefin Tuna
Conservation Status: Critically Endangered
Location: Atlantic Ocean, Mediterranean Sea
Lifespan: Average 30 years
Scientific Classification
Kingdom: Animalia
Phylum: Chordata
Class: Actinopterygii
Order: Perciformes
Family: Scombridae
Tribe: Thunnini
Genus: Thunnus
Species: T. thynnus
Binomial name: Thunnus thynnus
Description
Length: 2 to 2.5 m (6 ft, 7 in to 8 ft, 2 in)
Weight: Average 350 kg (770 lb)
Other: The body of the atlantic bluefin tuna is rhomboidal in profile and robust. The head is conical and the mouth rather large. The color is dark blue above and gray below with a gold coruscation covering the body and bright yellow caudal finlets. Bluefin tuna can be distinguished from other family members by the relatively short length of their pectoral fins. Their livers have a unique characteristic in that they are covered with blood vessels (striated). In other tunas with short pectoral fins, such vessels are either not present or present in small numbers along the edges.
Behaviour
The Atlantic Bluefin Tuna is known for its speed. The species usually swims at a speed of 1.5 to 4 knots, although it can maintain up to 8 knots for some time, and up to 20 knots for short periods. (1 knot = 1 nautical mile per hour). They can dive as deep as 914 m, and are known to swim long distances as they are a highly migratory species. Atlantic Bluefin Tuna are homeothermic (warm-blooded) and are therefore able to thermoregulate keeping their body temperatures higher than the surrounding water, which is why they are so well adapted to cold waters.
Predators or Prey?
The only known predators of the Atlantic Bluefin Tuna are humans. Humans cause overfishing of this species. The atlantic bluefin tuna typically hunts small fish and invertebrates such as sardines, herring, mackerel, squid and crustaceans.
Diet
Atlantic bluefin tuna consume smaller fishes such as mackerel, herring, whiting, flying fish, and mullet as well as squid, eels, and crustaceans.
Habitat
Atlantic bluefin live in subtropical and temperate waters of the North Atlantic Ocean, the Mediterranean, and Black Seas.
Conservation
In 2009, aquaculturists succeeded in breeding bluefin in captivity and keeping them alive through their development from larvae to fingerlings to young juveniles. In 2010, Greenpeace International has added the northern bluefin tuna to its seafood red list. "The Greenpeace International seafood red list is a list of fish that are commonly sold in supermarkets around the world, and which have a very high risk of being sourced from unsustainable fisheries".
Reproduction
The female bluefin are thought to produce up to 30 million eggs. Atlantic bluefin tuna spawn in two widely separated areas. One spawning ground exists in the western Mediterranean, particularly in the area of the Balearic Islands. The other important spawning ground of the Atlantic bluefin is the Gulf of Mexico. The western and eastern populations of Atlantic bluefin tuna are thought to mature at different ages. It is thought that bluefin born in the east reach maturity a year or two earlier than those spawned in the west.