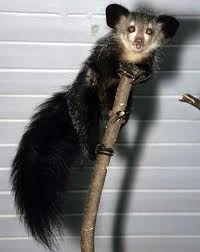 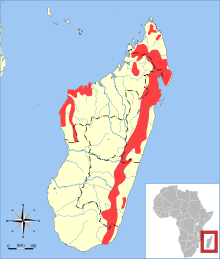 Scientific Classification
Kingdom: Animalia
Phylum: Chordata
Class: Mammalia
Order: Primates
Family: Daubentoniidae
Genus: Daubentonia
Species: D. Madagascariensis
Binomial name: Daubentonia Madagascariensis
Description
Body Length: 40 cm (16 in)
Tail Length: Extra 40cm (16 in)
Total length: 80cm (32 in)
Weight: 2.5 to 3 kg (5.5 to 6.5 lbs)
Other: The Aye-aye has has coarse, shaggy, black or dark brown fur with a mantle of white hairs. The eyes and ears are large and they have long middle fingers that they use to extract insects from tree holes.
Behaviour
The aye-aye is classically considered 'solitary' as they have not observed to groom each other. However, recent research suggests it is more social than once thought. It usually sticks to foraging in its own personal home range, or territory. The home ranges of males often overlap, and the males can be very social with each other. Female home ranges never overlap, though a male's home range often overlaps that of several females. The male aye-ayes live in large areas up to 80 acres (320,000 m2), while females have smaller living spaces that goes up to 20 acres (81,000 m2). Regular scent marking with their cheeks and neck is how aye-ayes let others know of their presence and repel intruders from their territory. Like many other prosimians, the female aye-aye is dominant to the male. They are not monogamous by any means, and often compete with each other for mates. Males are very aggressive in this regard, and sometimes even pull other males off a female during mating. Outside of mating, males and females interact only occasionally, usually while foraging. The aye-aye begins foraging anywhere between 30 minutes before and three hours after sunset. Up to 80% of the night is spent foraging in the canopy, separated by occasional rest periods. The monkey-like body of the aye-aye enables it to move vertically with ease. It climbs trees by making successive vertical leaps, much like a squirrel. Horizontal movement is more difficult, but the aye-aye rarely descends to jump to another tree, and can often cross up to 4 km (2.5 mi) a night.
Predators or Prey?
The main predator of Aye-ayes are Fossas. A Fossa is similar to a Mongoose or Meerkat. An Aye-aye's prey are insect larva. This includes caterpillars, tadpoles, maggots, grubs, and nymphs.
Diet
The aye-aye commonly eats animal matter, nuts, insect larva, fruits, nectar, seeds, and fungi, classifying it as an omnivore. Aye-ayes are particularly fond of cerambycid beetles It picks fruit off trees as it moves through the canopy, often barely stopping to do so. An aye-aye not in its natural habitat will often steal coconuts, mangoes, sugar cane, lychees and eggs from villages and plantations. Aye-ayes tap on the trunks and branches of the trees they visit up to eight times per second, and listen to the echo produced to find hollow chambers inside. Once a chamber is found, they chew a hole into the wood and get grubs out of that hole with their narrow and bony middle fingers.
Habitat
The aye-aye lives primarily on the east coast of Madagascar. Its natural habitat is rainforest or deciduous forest, but many live in cultivated areas due to deforesting. Rainforest aye-ayes, the most common, dwell in canopy areas, and are usually sighted upwards of 700 meters altitude. They sleep during the day in nests built in the forks of trees.
Conservation
The conservation status of the Aye-aye is Near Threatened. This means that there could be a higher population of Aye-ayes, but there is no immediate threat.
Reproduction
Sexual maturity for Aye-ayes occurs at about 2-3 years of age. When they're in estrus female Aye-ayes will call repeatedly to get the attention of males. Visual cues such as genital color change and swelling also alert males to the female's estrus. Aye-ayes are polyandrous, meaning that the females mate with several males. They usually only have one infant and gestation ranges from 160-170 days or about 5-6 months. Infants are weaned after 7 months and leave their mothers after two years. While hunting during the night, female Aye-ayes leave their infants "parked" in the nest.