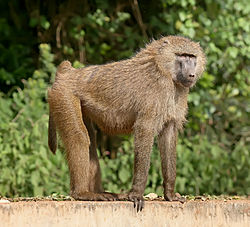 Facts
Conservation Status: Least Consern
Location: East Africa
Lifespan: 20 to 30 years
Scientific Classification
Kingdom: Animalia
Phylum: Chordata
Class: Mammalia
Order: Primates
Family: Cercopithecidae
Genus: Papio
Description
Other: All baboons have long dog-like muzzles; heavy, powerful jaws with sharp canine teeth; close-set eyes; thick fur except on their muzzle; a short tail; and rough spots on their protruding buttocks, called ischial callosities. These calluses are nerveless, hairless pads of skin that provide for the sitting comfort of the baboon.In all baboon species there is pronounced sexual dimorphism, usually in size but also sometimes in colour or canine development. Males of the Hamadryas Baboon species also have a large white mane.
Height: 50 to 120 cm (20 to 47 in)
Weight: 14 to 40 kg (30 to 90 lb)
Species and Subspecies
There are 5 species of baboons in the genus Papio:

Behaviour
Baboons usually leave their sleeping places around 7 or 8 a.m. After coming down from the cliffs or trees, adults sit in small groups grooming each other while the juveniles play. They then form a cohesive unit that moves off in a column of two or three, walking until they begin feeding. Fanning out, they feed as they move along, often traveling five or six miles a day. They forage for about three hours in the morning, rest during the heat of the day and then forage again in the afternoon before returning to their sleeping places by about 6 p.m. Before retiring, they spend more time in mutual grooming, a key way of forming bonds among individuals as well as keeping the baboons clean and free of external parasites. Baboons sleep, travel, feed and socialize together in groups of about 50 individuals, consisting of seven to eight males and approximately twice as many females plus their young. These family units of females, juveniles and infants form the stable core of a troop, with a ranking system that elevates certain females as leaders. A troop's home range is well-defined but does not appear to have territorial borders. It often overlaps with the range of other baboons, but the troops seem to avoid meeting one another. When they begin to mature, males leave their natal troops and move in and out of other troops. Frequent fights break out to determine dominance over access to females or meat. The ranking of these males constantly changes during this period. Males are accepted into new troops slowly, usually by developing "friendships" with different females around the edge of a troop. They often help to defend a female and her offspring. Baboons use over 30 vocalizations ranging from grunts to barks to screams. Nonvocal gestures include yawns, lip smacking and shoulder shrugging.
Predators or Prey?
The baboon's major predators are humans. Knowing that humans can easily kill or injure them when they are in trees, baboons usually escape through undergrowth. Males may confront other predators like leopards or cheetahs by forming a line and strutting in a threatening manner while baring their large canines and screaming. Baboons are fierce fighters, but a demonstration such as this can put the predator on the run. The prey of the Baboon are insects, fish, shellfish, hares, birds, vervet monkeys, and young, small antelopes.
Diet
Baboons are opportunistic omnivores and selective feeders that carefully choose their food. Grass makes up a large part of their diet, along with berries, seeds, pods, blossoms, leaves, roots, bark and sap from a variety of plants. Baboons also eat insects and small quantities of meat, such as fish, shellfish, hares, birds, vervet monkeys and young, small antelopes.
Habitat
Baboons are terrestrial (ground dwelling) and are found in open savannah, open woodland and hills across Africa. They are found in surprisingly varied habitats and are extremely adaptable. The major requirements for any habitat seems to be water sources and safe sleeping places in either tall trees or on cliff faces. When water is readily available, baboons drink every day or two, but they can survive for long periods by licking the night dew from their fur.
Conservation
The Centre for Animal Rehabilitation and Education - C.A.R.E., located in Phalaborwa, South Africa, is a wildlife rehabilitation facility dedicated to the care, welfare, rehabilitation and protection of injured and orphaned indigenous wild animals. The centre specializes in the care of Chacma baboons, actively pursuing their rescue, rehabilitation and release. The centre currently houses over 400 baboons and is the only facility in Southern Africa that accepts orphaned or abandoned baboons and offers them long term care. C.A.R.E. has pioneered many firsts in primate care, and its rehabilitation programme has gained respect within scientific and animal behavioral communities. C.A.R.E also has an incredible track record in successfully rehabilitating hand-reared animals and releasing fully formed troops back into the wild.
Reproduction
Females become sexually mature at the age of 3-5 years, males at 3 year. Females breed up to 20 years. Oestrous cycle is usually about 1 month. Births can occur in any month. The interval between births is varying from 1 - 2 years. The gestation period is varying from 154 -193 days. Most of the births take place at night. The afterbirth is usually eaten. The eyes of the infant are open at birth. They are born with a very dark nearly black coat and their coat changes to adult coloration 5 to 7 months later. The infants will cling on their mothers shortly after birth. They give birth to only 1 monkey. Rarely twins are born. For the first month, an infant baboon stays in very close contact with its mother. The mother carries the infant next to her stomach as she travels, holding it with one hand. By the time the young baboon is 5 to 6 weeks old it can ride on her back, hanging on by all four limbs; in a few months it rides jockey style, sitting upright. Between 4 and 6 months the young baboon begins to spend most of its time with other juveniles.