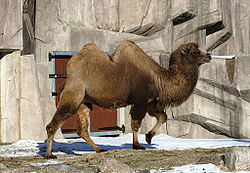 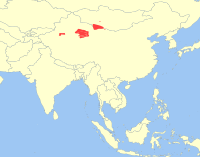 Scientific Classification
Kingdom: Animalia
Phylum: Chordata
Class: Mammalia
Order: Artiodactyla
Family: Camelidae
Genus: Camelus
Species: C. bactrianus
Binomial name: Camelus bactrianus
Description
Height: Over 7ft (2.1 m)
Weight: Over 1,800 lb (816 kg)
Other: Bactrian camels have two humps rather than the single hump of their Arabian relatives. The humps function the same way—storing fat which can be converted to water and energy when sustenance is not available. These humps give camels their legendary ability to endure long periods of travel without water, even in harsh desert conditions. As their fat is depleted, the humps become floppy and flabby. Like Arabian camels, Bactrians' nostrils close to keep sand at bay, and their bushy eyebrows and two rows of long eyelashes protect their eyes. Big, flat footpads help them navigate the rough rocky terrain and shifting desert sands without sinking under their own massive bulk or the weight of heavy packs.
Subspecies
There is some evidence that the Bactrian camel can be divided into different subspecies. In particular, it has been discovered that a population of wild Bactrian camel lives within a part of the Gashun Gobi region of the Gobi Desert. This population is distinct from domesticated herds both in genetic makeup and in behavior.
There are possibly as many as three regions in the genetic makeup that are distinctly different from domesticated camels and there is up to a 3% difference in the base genetic code. However, with so few wild camels, it is unclear what the natural genetic diversity within a population would have been. Another difference is the ability of these wild camels to drink saltwater slush, although it is not yet certain the camel can extract useful water from it. Domesticated camels do not attempt to drink salt water, though the reason is unknown.
Behaviour
Bactrian camels travel the desert in caravans made up of 6 to 20 camels. These groups will be composed of adolescent males, females and their young or a group of females and their young led by 1 adult male. Ordinarily, camels are very calm, patient animals. During mating season, male camels become aggressive and will often bite, spit at, and try to sit on other male camels. Bactrian camels were domesticates about 3500 years ago and have been vital to the cultures in their desert habitat.
Predators or Prey?
Other than man, the primary predator of the camel is the Tiger. Bactrian Camels are herbivores, and therefore do not have any prey.
Diet
Like domestic cows, camels are ruminants-that is, they feed and then regurgitate the food and chew it again. This is also called chewing cud. Able to survive on extremely sparse vegetation, they eat the tough grass, herbs, thin branches, and foliage of shrubs that grow in their arid environment. They search for food in the morning and evening and chew their cud in the afternoon. The camel can tolerate great variations in its body temperature and therefore loses little water through perspiration. Although camels can go for long periods without water, they do not actually store it in their humps. The humps are, in fact, reserves of fat that are converted into water when the camel becomes dehydrated.
Habitat
Bactrian camels live not in shifting Sahara sands but in Central and East Asia's rocky deserts. Temperatures in these locales can become searingly hot—over 100°F (38°C) in summer. Yet they can also drop to –20°F (-29°C) in winter.
Conservation
Nearly all of the estimated 1.4 million Bactrian camels alive today are domesticated. In October 2002, the estimated 800 remaining in the wild in northwest China and Mongolia were classified as critically endangered on the IUCN Red List of Threatened Species.
Reproduction
When male camels become sexually mature, at about five or six years of age, they're driven from the family group and live alone or in bachelor groups. Female Bactrian camels become sexually mature at about three or four years of age. Females usually give birth to a single offspring every other year, in March or April, after a gestation period of 12 to 14 months. A single young is born. Within several days, it can walk perfectly with the ambling gait that is characteristic of the adult camel. The females nurse the young for 5 years until they reach sexual maturity. Young males are then driven out to form bachelor herds; young females remain with their mothers. Older males return to the herd during mating season but are often driven out by younger, rival males.