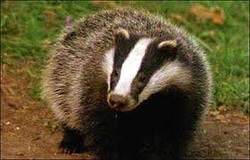 Facts
Conservation Status: Least Concern
Location: North America, Ireland, Great Britain Scandinavia.  Japan China. The Javan Ferret badger lives in Indonesia.
Lifespan: Up to 14 years in the wild. Up to 26 years in captivity
Scientific Classification
Kingdom: Animalia
Phylum: Chordata
Class: Mammalia
Order: Carnovora
Suborder: Caniformia
Superfamily: Musteloidea
Family: Mustelidae
Subfamily: Melinae, Mellivorinae, Taxidiinae
Genera: Arctonyx, Melogale, Meles, Mellivora, Taxidea
Description
Eurasian Badgers are easily recognisable by the conspicuous black and white stripes running from the nose to the shoulders. They are stocky animals with short black legs and silvery grey backs. The body is flattened, and the legs are short. The fur on the back and flanks of the Badger ranges from grey to red. The face of the Badger is distinct. The throat and chin are white, and the face has black patches. A white dorsal stripe extends back over the head from the nose. In northern populations, this stripe ends near the shoulders. In southern populations, however, in continues over the back to the bottom. Males are significantly larger than females, and animals from northern populations are larger than those from southern populations.
Behaviour
The behavior of badgers differs by family, but all shelter underground, living in burrows called setts, which may be very extensive. Some are solitary, moving from home to home, while others are known to form clans. Clan size is variable from 2 to 15. Badgers can be fierce animals and will protect themselves and their young at all costs. Badgers are capable of fighting off much larger animals such as wolves and bears. Badgers can run or gallop at up to 25–30 kilometres per hour (16–19 mph) for short periods of time.

In North America, coyotes sometimes eat badgers and vice versa, but the majority of their interactions seem to be mutual or neutral. American badgers and coyotes have been seen hunting together in a cooperative fashion.

Predators or Prey?
In Britain, adult badgers have no natural enemies. Young cubs however may be taken by foxes, or even, occasionally, by golden eagles or buzzards. The photo here shows the male golden eagle at Haweswater (in the English Lake District) feeding on the corpse of a dead adult badger in the winter of 1986. It is unlikely that the eagle killed the badger itself. Elsewhere, in Europe and Asia, there are more predators which will take badger cubs, such as wolves, lynx, wolverines, and eagle owls. Some of these species take adult badgers as well as cubs. Badgers are classified as carnivores, meaning their diet consists primarily of meat. They mostly consume small mammals such as mice, rats, chipmunks, ground squirrels, pocket gophers, and their diet depends on what is available according to the season. Badgers will often bury excess food for future meals. In addition to their basic diet, they also consume eggs, carrion, and feed on birds and small reptiles. Badgers have been known to eat rattlesnakes, and they are amazingly unharmed by the snake's poison venom. Coyotes have been known to steal a badger's food after the fleeing prey reaches the surface of the ground. Most of the badger's prey is captured by digging through the soil using incredible speed.
Diet
The diet of the Eurasian badger consists largely of earthworms, insects, and grubs. They also eat small mammals, amphibians, reptiles and birds as well as roots and fruit. Indeed, in southern Spain, badgers mostly feed on rabbits. The honey badger of Africa consumes honey, porcupines and even venomous snakes (such as the puff adder). They will climb trees to gain access to honey from bees' nests. American Badgers are fossorial carnivores. Unlike many carnivores that stalk their prey in open country, badgers catch most of their food by digging. They can tunnel after ground-dwelling rodents with amazing speed. Badgers have been known to become intoxicated with alcohol after eating rotting fruit.
Habitat
Badgers are found in much of North America, Ireland, Great Britain and most of Europe as far as southern Scandinavia. They live as far east as Japan and China. The Javan Ferret badger lives in Indonesia.
Conservation
Badgers are protected by quite a few laws in Britain. A license is requiredby anyone who wants to deliberately kill or trap Badgers. Badger-baiting (using dogs to fight a Badger) has been outlawed since 1835, and digging for them was made illegal by the Badgers Act 1973. The Protection of Badgers Act 1992 combines Badger legislation and makes it an offence to damage, destroy, or obstruct Badger setts, as well as protecting the Badger, itself.
Reproduction
Badgers reproduce by a method known as delayed implantation. They can breed at any time of the year. This is to ensure that young are produced at a time when temperature and food conditions are at their best. After mating, a female badger (sow) keeps the fertilised eggs in her uterus in a state of suspended development until they are implanted in the uterine wall, usually after ten months. After an additional gestation period of seven to eight weeks, the female gives birth to a litter of one to six cubs, which are usually born in February.

Badger cubs emerge from the sett when they are about nine or ten weeks old. Cubs become independent of their mother by around the following autumn, and are fully mature by the age of two years.

Badgers are carnivores by classification yet are omnivores by habit. Their diet consists mainly of earthworms, but includes frogs, rodents, birds, eggs, lizards, insects, bulbs, seeds and berries. Blackberries and apples are major food sources in the autumn.