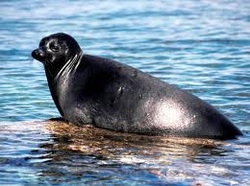 Scientific Classification
Kingdom: Animalia
Phylum: Chordata
Class: Mammalia
Order: Carnivora
Family: Phocidae
Genus: Pusa
Species: P. Sibirica
Binomial name: Pusa Sibirica
Description
Weight: 70 kg (155 lbs) average.
Length: 1.3 m (4 ft 3 in) average.
Diving time: Usually 20 to 25 minutes (45 to 60 minutes maximum).
Other: The animals show very little sexual dimorphism; the males are only slightly larger than the females. They have a uniform steely-grey coat on their backs and fur with a slightly more yellow tinge coating their abdomens. As the coat weathers, it becomes brownish. When first born, pups are around 4.5 kg (10 lb) and have a coating of white silky natal fur. This fur is quickly shed and exchanged for a darker coat, much like that of the adult. Rare Baikal seals can be found with spotted coats.
Behaviour
Baikal seals are solitary animals.  During the winter months while the lake is frozen, seals maintain breathing holes.  As the ice begins to thaw, seals congregate around larger holes to hunt. They keep these holes open by scraping them with their strong claws. Some seals may also use their head, teeth, and rear flippers. Adult seals have one breathing hole, but this hole has many auxiliary openings. Immature seals only use one breathing hole. Baikal seals are most widely dispersed during the winter months. Mature males scatter throughout the lake. Mature females are usually found on the east shore. Male and female seals that have not yet reached sexual maturity are found on the west shore. Pregnant females remain on the ice for most of the winter. At around the first of April, Baikal seals begin to congregate to feed along fresh openings where the ice has melted. In May they move to the north end of the lake and stay there until they molt, which usually occurs in late May and early June. During the summer months, Baikal seals move to the southeast corner of the lake to use the rocks and shore for hauling out. When fall returns, they again begin to move to the areas where ice is forming.Baikal seals are solitary animals, but several seals may congregate and share access holes. They will also gather at places where the habitat is most favorable. In spring, when they feed the most, 200 to 500 animals will gather in one area. The first to come are juveniles, then adult males, and, finally, new pups and their mothers. Large groups also form on the shores in the summer.
Predators or Prey?
The Baikal Seal's predators are humans, polar bears, arctic foxes, and birds. The Baikal seal's prey are endemic fish species. This includes bulllhead, and golomyanka.
Diet
The Baikal seal's diet consists of these endemic fish species.  These include a few species of bullhead, and the golomyanka.  The golomyanka is pearl colored, deep lake fish.  It is extremely rich in Vitamin A, containing a content of about thirty percent.  This fish does not swim in schools, preventing its classification as a food fish.  As a populous fish of Lake Baikal that is not netted by human fishermen, the golomyanka is the staple of the Baikal seal's diet.
Habitat
Baikal seals are the only seal species to live entirely in freshwater.  Lake Baikal is a 395 mile long lake in eastern Siberia, bordering Mongolia.  It is the world's oldest lake, dating back 25-30 million years ago, and the world's deepest lake, reaching an estimated depth of 5,315 feet.  Twenty percent of the earth's unfrozen freshwater is held by Lake Baikal.
Conservation
As of 2007, the Baikal seal is listed as a “lower risk” species on conservation lists. This means that while they are not currently threatened or endangered, it is possible and even likely they will be in the near future. At last official count, by the Russian government in 1994, they numbered 104,000. In 2000, Greenpeace performed its own count and came up with somewhere from 55,000 to 65,000 seals. It is thought excessive hunting, as well as less severe problems of poaching and pollution, are quickly reducing the population.
Reproduction
Baikal seals are solitary animals.  During the winter months while the lake is frozen, seals maintain breathing holes.  As the ice begins to thaw, seals congregate around larger holes to hunt.  Breeding occurs in the water, during late spring.  Females experience a period of delayed implantation.  Gestation lasts nine months.  A single pup is born on the ice in late winter, between February and March.  A newborn pup weighs 7-8lbs at birth and is about three feet in length.  They are covered in a fluffy white natal fur, called lanugo.  This white fur is shed after six weeks, accompanied by the growth of adult fur.  Pups are weaned 2-3 months later.  The weaning is synchronous with the lake ice melting, and since the southern lake melts faster than the northern lake ice, young seals of the southern seal population are smaller at weaning age than northern seal pups.  Male seals reach sexual maturity at 4-7 years.  Females mature sexually at 3-6 years.