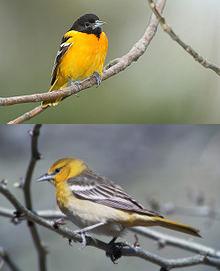 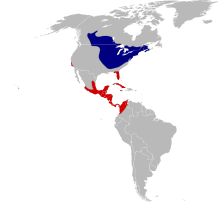 Blue: breeding Red: wintering
Scientific Classification
Kingdom: Animalia
Phylum: Chordata
Class: Aves
Order: Passeriformes
Family: Icteridae
Genus: Icterus
Species: I. galbula
Binomial name: Icterus galbula
Description
Length: average 18 cm
Weight: average 34 g
Other: Adults have a pointed bill and white bars on the wings. The adult male is orange on the underparts, shoulder patch and rump. All of the rest of the male is black. The adult female is yellow-brown on the upper parts with darker wings, and dull orange on the breast and belly.
Behaviour
These birds migrate in flocks to southern Mexico, Central America and northern South America. Some birds may remain near feeders in winter. The male sings a loud flutey whistle that often gives away the bird's location before any sighting can be made. Baltimore Orioles have a distinctive twopich undulating slow warble, though the speed of the song may change during one call. Other calls include high chips and chirps, as well as a rapid dry rattle. These Orioles can be very shy, solitary birds for most of the year, though after the nesting season they are likely to appear in pairs or small mixed flocks, particularly while foraging in the autumn and winter. They forage in shrubs, bushes, trees, hunting for insects, or picking through flowers. When the Baltimore Oriole's range overlaps with the Bullock's Oriole, interbreeding and hybridization is common.
Predators or Prey?
The Baltimore oriole has a wide range of different avian and mammalian predators, some of which take eggs, young from the nest, or young fledglings. Birds of prey include the Common Grackle, American Crow, Eastern Screech-Owl, Blue Jay, and Black-billed Magpie, and these are the primary threats to offspring. Ground predators such as squirrels and the red fox steal and eat eggs in addition to killing the live young. Domestic cats are the primary predators of adult orioles. The prey of the Baltimore Oriole are insects such as; caterpillars, spiders, and other adult insects.
Diet
Baltimore Orioles forage in trees and shrubs, also making short flights to catch insects. They mainly eat insects, berries and nectar, and are often seen sipping at hummingbird feeders. Oriole feeders contain essentially the same food as hummingbird feeders, but are designed for orioles, and are orange instead of red and have larger perches. Baltimore Orioles are also fond of halved oranges, grape jelly.
Habitat
Baltimore Orioles are found high, in leafy deciduous trees, but not in deep forests: they’re found in open woodland, forest edge, orchards, and stands of trees along rivers, in parks, and in backyards.
Conservation
Baltimore Oriole populations appear stable over the long term. Data collected since 1966 show a small population decline in the eastern part of the range, but a larger increase in more western populations. Because they breed in North America and winter in Central and South America, Baltimore Orioles are vulnerable to deforestation and habitat loss in many nations; their conservation requires international cooperation. Spraying insecticides onto trees not only kills off Baltimore Orioles’ insect food, but may poison the birds directly. Orioles and many other songbirds migrate at night, when they can become disoriented by lights or rainstorms and crash into tall structures such as skyscrapers and radio towers.
Reproduction
Baltimore Orioles are monogamous birds that pair together after elaborate courtship rituals that include tail and wing displays and bowing to show off plumage colours. The Baltimore Oriole's nest is a tightly woven pouch located on the end of a branch, hanging down on the underside. A mated pair will produce one bood of 3 to 5 eggs per year, and the female Oriole will incubate the eggs for 12 to 14 days. Both parents feed the young for an additional 12 to 14 days until the young birds can leave the nest.