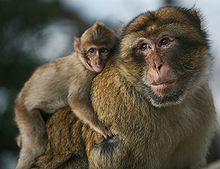 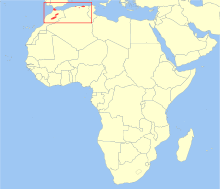 Scientific Classification
Kingdom: Animalia
Phylum: Chordata
Class: Mammalia
Order: Primates
Family: Cercopithecidae
Genus: Macaca
Species: M. Sylvanus
Binomial name: Macaca Sylvanus
Description
Length: 75 cm (30 in)
Weight: 16 kg (29 lbs)
Other: The Barbary Macaque is a type of monkey. The monkey is yellowish-brown to grey with lighter undersides. Its face is a dark pink and its tail is vestigial. This means that the species do not use or need their tail, it has no purpose. The front limbs of this monkey are longer than its hind limbs. Females are somewhat smaller than males.
Behaviour
It is a diurnal animal (active during the day and sleeping at night), dividing its time more or less equally between arboreal (in trees) and terrestrial (on ground) territory. By day, the Barbary Macaque patrols a territory which may span several square kilometers; it peacefully co-exists with other primate species, sharing watering holes without incident. The Barbary Macaque moves about energetically on all fours, occasionally rising erect on its hind limbs to survey for threats. The Barbary Macaque is a gregarious monkey, forming mixed groups of several females and males; the troop of 10 to 100 individuals is matriarchal, with its hierarchy determined by lineage to the lead female. Unlike other macaques, the males participate in rearing the young; much time is spent playing and grooming with them. In this way, a strong social bond is formed between a male and his offspring, both the male's own and those of others in the troop. This may be a result of selectiveness on the part of the females, who seem to prefer highly parental males.
Predators or Prey?
The primary predator of Barbary Macaques are large eagles that patrol the mountains for prey. At least one troop member is constantly vigilant for danger. Barbary Macaques give a special high-frequency "ah-ah" alarm call when eagles are spotted. Upon hearing this call, they quickly escape to the lower canopy to hide. Less common predators consist of golden jackals and red foxes. The only prey of the Barbary Macaques are insects.
Diet
Mostly herbivorous, this monkey feeds on leaves, roots, and fruit, but will also eat insects.
Habitat
Dwelling in forests of cedar, pine and oak, the Barbary Macaque may frequent elevations of 2,100 m (6,900 ft) or more.
Conservation
The habitat of the Barbary Macaque is under threat from increased logging activity; they are listed as endangered by the IUCN Red List. Local farmers view the monkeys as pests, and engage in extermination of the species. Once common throughout northern Africa and southern Europe, there are estimated to be just 12,000 to 21,000 Barbary Macaques left.
Reproduction
The mating season runs from November through March. After a gestation period of 147 to 192 days, typically one baby per female is born; twins are a rarity. The monkeys reach maturity at 3 to 4 years of age, and may live for 20 years or more.