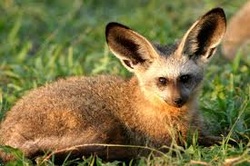 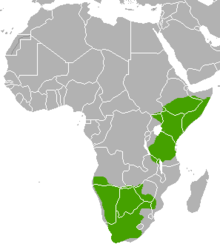 Scientific Classification
Kingdom: Animalia
Phylum: Chordata
Class: Mammalia
Order: Carnivora
Family: Canidae
Subfamily: Caninae
Genus: otocyon
Species: O. megalotis
Binomial name: Otocyon Megalotis
Description
Body Length: Average 55 cm
Ear length: Average 13 cm
Weight: 3 to 5 kg
Other: The Bat-eared Fox has tawny fur with black ears, legs and parts of the pointed face. The teeth of the Bat-eared Fox are much smaller than teeth of other canid species.
Behaviour
Bat-eared Foxes are mostly nocturnal animals that live in small groups consisting of mated pairs and their young. The pairs live in dens and typically raise two to five pups together. Mated pairs are very social and are monogamous, although it is unknown if they mate for life. Bat eared foxes are good diggers and often dig prey out of holes.  They do sometimes dig their own dens, but will often modify a disused burrow dug by an aardvark or other species. They are playful and agile and their ability to turn rapidly even at high speed has given rise to its Afrikaans colloquial name - Draaijakkals - the turning jackal.
Predators or Prey?
Bat eared foxes are sometimes preyed on by larger predators such as Brown Hyena, Spotted Hyena or large birds of prey. Bat eared foxes often suffer from the activities of the similar looking black backed jackals which often take farmers livestock, and this results in the farmers hunting and killing jackals and often killing bat eared foxes as well - especially when they hunt with dogs as these don't distinguish between a bat eared fox, an Aardwolf and a black backed jackal, even though neither the Aardwolf nor Bat Eared Fox is a threat to a farmers livestock. Bat eared foxes mainly prey on insects - especially termites, as well as scorpions, centipedes and other invertebrates.  As well as insects, the bat eared fox also preys on mice and other rodents, and snakes.  When hunting, the bat eared foxes excellent hearing enables it to locate prey, even if the prey is underground.  Once the prey is located, the fox will then dig the prey up.
Diet
The Bat-eared Fox has an insectivorous diet, insects making up as much as 80% of its food intake. The Bat-eared Fox visits termite hills, follows locust swarms and stays close to herds of zebras or antelopes in order to feed on the insects landing on their excrement. In addition to insects, the Bat-eared Fox eats rodents, birds and eggs, and sometimes fruits. Most of its water intake comes from the food it eats.
Habitat
Bat eared foxes are found in open savannah, grassland, scrub areas, lightly wooded areas and farmland.  They are generally absent from desert areas and forests. In the Southern part of Africa, Bat Eared Foxes inhabited the area ranging from the Northern and Western Cape Province in South Africa to Northern Namibia, Botswana and the Southern part of Zimbabwe. They prefer semi arid regions like the Kalahari and Namib regions in areas with short grass and low shrubs.
Conservation
In southern Africa the primary threats are hunting for skins or because they are perceived as being predators of small livestock. Commercial use is very limited, but winter pelts are valued and sold as blankets. They are also sold as hunting trophies in South Africa. Populations fluctuate due to disease or drought.
Reproduction
Bat eared foxes mate for the long term - often for life, and breed annually, and give birth around the start of the annual rains, which is when the insect population is at its highest, thus ensuring a good food supply.  The gestation period is around 60 days, and the female gives birth to between 2 and 6 young per litter.  The young emerge from the den at around 2-3 weeks old, by which time only 2 or 3 of the litter have survived.  Up to the age of 15 weeks, the young are fed only milk, and after this time they eat the same as the adults.  The pups are at full adult size by the time they are 4-6 months old.  Several females sometimes share a den, and when this happens the pups are cared for and suckled by all the lactating females.  The male bat eared fox helps care for and protect the young.