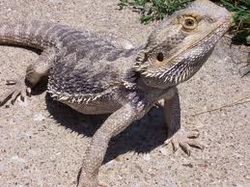 Facts
Also known as: Pogona
Conservation Status: Least Concern
Location: Australia
Lifespan: Over 10 years
Scientific Classification
Kingdom: Animalia
Phylum: Chordata
Class: Reptilia
Order: Squamata
Suborder: Lacertilia
Family: Agamidae
Subfamily: Agaminae
Genus: Pogona
Description
Length: 13 to 24 in
Weight: 10 to 20 oz
Other: The Bearded Dragon's characteristics include spiny scales arranged in rows and clusters. These are found on the throat, which can be expanded when threatened, and at the back of the head. The species also displays a hand-waving gesture, this is to show submission between Dragons. They also have a head bobbing act to show dominance. They do have the chameleon-like ability to change colour during rivalry challenges between males, and in response to temperature change and other stimuli.
Species
Behaviour
Head bobbing is a common act in males and is a display of dominance. This can be a large and quick movement. A female may also display this, but is less common than males and her head bobbing will often be smaller and slower than a male's head bobbing. Unlike the head hob, the arm wave is an act of submission and is commonly displayed by females. When a male is displaying dominance, the female will often wave her arm in a circular motion to inform the male that she is submissive. This can also be shown as meaning a thank you after you have fed your dragon. Males will also display this behaviour but is very rare, and is likely to be after another male has displayed more dominance. The bearded dragon is known for their large beard under his chin. They may bloat this into a large balloon to appear bigger than they actually are. This is a sign of aggression but don't be intimidated by this. It is often a bluff and would not be followed up by an aggressive bite despite how fierce this conduct may appear. If your beardie appears to be on alert with tense body shaping and up on their legs then this is more than a bluff. This will happen when your dragon is unhappy for whatever reason, if they feel intimidated by you or if he is trying to display that he is 'alpha male'.
Predators or Prey?
Bearded Dragons no longer have any predators. This is because Bearded Dragons have been domesticated. They are kept as pets, so they no longer have any predators. The Bearded Dragon's prey consist of meal worms, king worms, wax worms, crickets, locusts, cockroaches, and pink mice.
Diet
Bearded dragons are native to the central Australian desert, where food is often scarce. Bearded Dragons are omnivorous, capable of subsisting on a wide variety of food sources. Usually when younger they will eat more bugs and similar creatures than as they grow, when fully grown they will prefer to eat leafy green foods, but the occasional meat such as meal worms, crickets, locusts is needed. Sometimes they like to eat things like young mice e.g. pinkies and small lizards.
Habitat
The Bearded Dragons live in the arid, rocky, semi-desert regions and dry open woodlands of Australia. They are adept climbers, spending time on branches and in bushes, even found on fence posts when living near human habitation. They bask on rocks and exposed branches in the mornings and afternoons.
Conservation
Bearded Dragons are popular exotic pets, most commonly kept are the Inland or Central Bearded Dragon. They are a popular species among children, because of their friendly and calm nature, along with the relative ease of caring for them. Therefore, there is a high population of Bearded Dragons.
Reproduction
Central bearded dragons reach full sexual maturity around 18 months of age. Males will become very aggressive towards each other and will assert their dominance by inflating their beards and through fast head bobbing. Breeding typically occurs in the early spring. Females will lay a clutch of eleven to thirty oblong-shaped eggs in a shallow nest dug in the sand. After being laid the eggs are buried and are left unattended. The eggs will hatch approximately 60 to 80 days later depending on the incubation temperature. In captivity, they can be incubated in a styrofoam fish box, but without a male lizard the eggs the female lay will not be fertile. However a female bearded dragon can retain sperm, and thus produce fertile eggs even after being separated from a male.

Bearded Dragon courtship involves the male "head bobbing" to display dominance. If the female displays submissive behavior the male will use its mouth to grab the back of the females head and the male will also wrap its front legs around the females upper torso to keep her from moving. Copulation and insemination doesn't take very long. The gestation period averages about a month and a half.