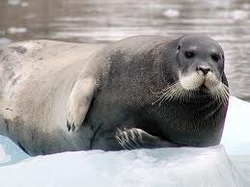 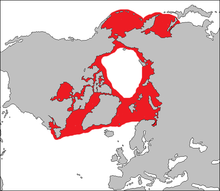 Scientific Classification
Kingdom: Animalia
Phylum: Chordata
Class: Mammalia
Order: Carnivora
Family: Phocidae
Genus: Erignathus
Species: E. barbatus
Binomial name: Erignathus barbatus
Subspecies
Description
Length: 2.25 to 2.7 m (7.4 to 8.9 ft)
Weight: 275 to 340 kg (606 to 750 lb) Both sexes are the same size.
Body fat content: 30 to 40 %
Behaviour
Adult Bearded Seals tend not to dive very deep, favoring shallow coastal areas no more than 300 m (980 ft) deep. Pups up to one year old, however, will venture much deeper, diving as deep as 450 m (1,480 ft).
Predators or Prey?
The Bearded Seal is a primary food source for the Polar Bear, Orca (killer whale), walrus, and for the Inuit of the Arctic coast. The Inuit is the native people of the Arctic coast. The Bearded Seal preys on marine creatures like clams, squid, and other fish at the lowest level of the sea.
Diet
The Bearded Seal's diet consists primarily of crustaceans (shrimps and crabs), molluscs (clams and whelks), and some fish such as sculpin, flatfish, and cod. They feed in water depths of less than 130 m.
Habitat
The habitat of the Bearded Seal is the Arctic where the ice shifts and is thinned or kept open by strong currents. Because of their benthic (deep diving) feeding habits, Bearded Seals usually keep to relatively shall water areas, less than 200 m deep.
Conservation
The impact of natural events and human-caused activities on Bearded Seal populations is difficult to determine because accurate population data is not available.

A growing concern is change in the Arctic climate which is changing water flow and nutrient transport in the Bering Strait, as well as a decrease in ice habitat caused by global warming. Furthermore, oil and gas interests in the Bearded Seal habitat, particularly the Chukchi and Beaufort Seas, may degrade their environment and decrease food supply. Ship traffic in the Northern Sea Route is also a cause for concern. Commercial fishing may also cause problems in the central Bering Sea if Bearded Seal prey such as clams, crabs, snails, and whelks are depleted.

The Bearded Seal is a popular species with Arctic coastal communities who hunt them for food, fur, and oil. An estimated 1,500 to 2,000 seals have been killed annually in the Bering and Okhotsk Seas, however, current figures are unavailable. Partial data for the 1990's indicate an annual kill of about 1,750 seals.
Reproduction
The Bearded Seal gives birth in the spring. In the Canadian Arctic, seal pupping occurs in May. Further south, in Alaska, most pups are born in late April. Pups are born on small drifting ice floes in shallow waters, usually weighing around 30–40 kg. They enter the water only hours after they are born, and quickly become proficient divers. Mothers care for the pups for 18–24 days, during which time the pups grow at an average rate of 3.3 kg per day. During this time, pups consume an average of eight liters of milk a day. By the time they are weaned, the pups have grown to about one hundred kilograms.

Just before the pups are weaned, a new mating cycle takes place. Females ovulate at the end of their lactation period, but remain close to their pups, ready to defend them if necessary. During the mating season, male seals will "sing," emitting a long-drawn-out warbling note that ends in a sort of moan or sigh. This sound may attract females, or may be used by the males to proclaim their territory or their readiness for breeding. Males occupy the same areas from one year to the next.