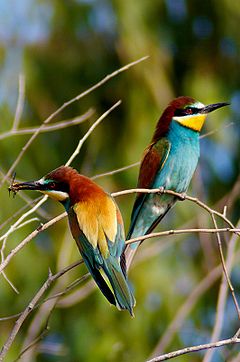 Facts
Conservation Status: Least Concern
Location: Africa and Asia but others occur in southern Europe, Australia, and New Guinea.
Lifespan: 12 to 18 years
Scientific Classification
Kingdom: Animalia
Phylum: Chordata
Class: Aves
Order: Coraciiformes
Family: Meropidae
Genera: Nyctyornis
Meropogon
Merops
Description
Length: 19 to 24 cm
Other: They are characterised by richly coloured plumage, slender bodies, and usually elongated central tail feathers. All have long downturned bills and pointed wings, which give them a swallow-like appearance when seen from afar. The upper back and wings are green in color, and the lower back and under-tail coverts are bright blue. The undersides of the wings and primary flight feathers are red and tipped with black, and the tail is black to deep violet. The Bee-eater's two central tail feathers are longer than the other tail feathers, and are longer in the male Bee-eaters than in the females. The crown of the head, the stomach and breast, and the throat are pale yellowish in color, and the Bee-eater has a black bib and a black stripe through its red eye.
Subspecies
There are 26 different species of Bee-eater.
Behaviour
Bee-eaters are gregarious. They form colonies by nesting in burrows tunnelled into the side of sandy banks, such as those that have collapsed on the edges of rivers. All bee-eaters are very social birds. When they are not breeding, they roost together in large groups in dense undergrowth or large trees. Bee-eaters also fly freely to bush fires to prey upon fleeing insects.
Predators or Prey?
Cane Toads are known to prey on nestlings. Before eating its meal, a bee-eater removes the sting by repeatedly hitting and rubbing the insect on a hard surface. During this process, pressure is applied to the insect thereby extracting most of the venom. Notably, the birds only catch prey that are on the wing and ignore flying insects once they land.
Diet
As the name suggests, bee-eaters predominantly eat flying insects, especially bees and wasps, which are caught in the air by sallies from an open perch. While they pursue any type of flying insect, honey bees predominate in their diet. Hymenoptera (ants, bees and wasps) comprise from 20% to 96% of all insects eaten, with honey bees comprising approximately one-third of the Hymenoptera.
Habitat
The Bee-eater form colonies by nesting in burrows tunnelled into the side of sandy banks, such as those that have collapsed on the edges of rivers. As they live in colonies, large numbers of these holes are often seen together, white streaks from their accumulated droppings accentuating the entrances to the nests
Conservation
The conservation status of this species is of Least Concern. Therefore, conservation is not immediately needed for this species.
Reproduction
Breeding season is before and after the rainy season in the north, and from November to January in the south. Rainbow bee-eaters are believed to mate for life. The male will bring the female insects while she digs the burrow that will be their nest. Most of the species in the family are monogamous, and both parents care for the young, sometimes with the assistance of other birds in the colony. Their eggs are white and they generally produce 2-9 eggs per clutch (depending on species). The eggs are incubated for about 24 days, until hatching. The young bee-eaters fledge after about 30 days and are fed by both parents, as well as any older bee-eaters that may not have paired off or have lost their mate.