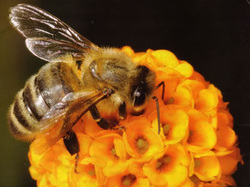 Facts
Conservation Status: 2 are Extinct. 6 are Fairly Common. Others are declining.
Location: Everywhere, except polar regions.
Lifespan: Queen - 2 to 5 years. Drone (male) - 40 to 50 days. Workers (female) -  1 to 4 months.
Scientific Classification
Kingdom: Animalia
Phylum: Arthropoda
Class: Insecta
Order: Hymenoptera
Suborder: Apocrita
Superfamily: Apoidea
(unranked): Anthophila
Families: Andrenidae
Apidae
Colletidae
Dasypodaidae
Halictidae
Megachilidae
Meganomiidae
Melittidae
Stenotritidae
Synonyms: Apiformes
Description
Length: 2.1 to 39 mm (5/64 to 1.5 in)
Other: Bees have a long proboscis (a complex "tongue") that enables them to obtain the nectar from flowers. They have antennae almost universally made up of 13 segments in males and 12 in females, as is typical for the superfamily. Bees all have two pairs of wings, the hind pair being the smaller of the two; in a very few species, one sex or caste has relatively short wings that make flight difficult or impossible, but none are wingless.
Subspecies
There are nearly 20,000 known species of bees in seven to nine recognized families, though many are undescribed and the actual number is probably higher.
Main species/types of Bees are Bumble Bee, Honey Bee, and Stingless Bee.
Behaviour
The physical makeup of a colony has been described. An additional requirement of a colony is a social pattern or organization, probably associated with a “social pheromone.” It causes the bees to collect and store food for later use by other individuals. It causes them to maintain temperature control for community survival when individually all would perish. Individuals within the colony communicate with each other but not with bees of another colony. Certain bees in the colony will sting to repel an intruder, even though the act causes their death. All of these, and perhaps many other organizational activities, probably are caused by pheromones.
Predators or Prey?
Bees are the favorite meal of, the Bee-eater. Other common predators are kingbirds, mockingbirds, beewolves, and dragonflies. Bees do not have predators as they feed on pollen and nectar from flowers.
Diet
Pollen, which is provided by male bees, provides the protein in the bees' diet. Also, nectar provides the carbohydrates in the bees' diet. Water is also used to dilute the honey before eating it.
Habitat
They are found on every continent except Antarctica, in every habitat on the planet that contains insect-pollinated flowering plants. One reason for this is that bumble bees can regulate their body temperature, via solar radiation, internal mechanisms of "shivering" and radiative cooling from the abdomen (called heterothermy).
Conservation
Bees are beautiful, hard, working, and incredibly important pollinators. The UK currently has 24 bee species. In the last 70 years, two species have become nationally exstinct, and others have declined dramatically. A further six are "UKBAP priority species" - they urgently need our help and may face extinction unless landscape-scale action is taken. Two species (the Shrill Carder and Great Yellow) are of particular concern due to their small and fragmented populations. Six species are still fairly common, but the other species have declined to varying degrees. Bees should be a conservation priority, but at present, not enough is being done to help them.
Reproduction
It takes 21 days for the honey bee to develop into a "hive bee" upon hatching from the egg. The "hive bee" spends the next 21 days doing hive chores and feeding larvae. After the "hive bee" period, the bee passes into the category of "field bee," or forager. These are the bees who leave the hive to return with nectar, pollen and water. In the height of nectar flow, these bees wear their wings out from flying and die within three weeks.