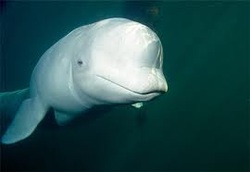 Scientific Classification
Kingdom: Animalia
Phylum: Chordata
Class: Mammalia
Order: Cetacea
Family: Monodontidae
Genus: Delphinapterus
Species: D. leucas
Biinomial name: Delphinapterus leucas
Description
Length: Males 5.5 m (18 ft). Females 4.1 m (13 ft)
Weight: Males 1,100 to 1,600 kg (2,400 to 3,500 lb). Females 700 to 1,200 kg (1,500 to 2,600 lb)
Other: The adult beluga is rarely mistaken for another species, because it is completely white or whitish-gray in color. Calves, however, are usually gray. Its head is unlike that of any other cetacean. Like most toothed whales it has a melon—an oily, fatty tissue lump found at the center of the forehead. The beluga's melon is extremely bulbous and even malleable. The beluga is able to change the shape of its head by blowing air around its sinuses. Unlike many dolphins and whales, the vertebrae in the neck are not fused together, allowing the animal to turn its head laterally. The rostrum has about 8 to 10 teeth on each side of the jaw and a total of 34 to 40 teeth.Belugas have a dorsal ridge, rather than a dorsal fin. The absence of the dorsal fin is reflected in the genus name of the species--apterus the Greek word for "wingless." The evolutionary preference for a dorsal ridge rather than a fin is believed to be an adaptation to under-ice conditions, or possibly as a way of preserving heat.

Behaviour
Belugas are highly sociable. Groups of males may number in the hundreds, while mothers with calves generally mix in slightly smaller groups. When pods aggregate in estuaries, they may number in the thousands. This can represent a significant proportion of the entire population and is when they are most vulnerable to hunting.

Pods tend to be unstable, meaning that they tend to move from pod to pod. Radio tracking has shown that belugas can start out in a pod and within a few days be hundreds of miles away from that pod. Mothers and calves form the beluga's closest social relationship. Nursing times of two years have been observed and lactational anestrus may not occur. Calves often return to the same estuary as their mother in the summer, meeting her sometimes even after becoming fully mature.

Belugas can be playful—they may spit at humans or other whales. It is not unusual for an aquarium handler to be drenched by one of his charges. Some researchers believe that spitting originated with blowing sand away from crustaceans at the sea bottom.

Unlike most whales, it is capable of swimming backwards.

Predators or Prey?
Killer Whales and Polar Bears prey on Beluga Whales, especially the calves. People have hunted Beluga Whales for hundreds of years, but are now only hunted by a few Arctic-dwelling tribes. Beluga Whales are opportunistic feeders. This means that they will prey on almost any small marine animal when in reach. This includes octopus, squid, crabs, snails, and over 100 more.
Diet
Beluga Whales are opportunistic feeders. They prey on about 100 different kinds of primarily bottom-dwelling animals. They eat octopus, squid, crabs, snails, sandworms, and fishes such as, capelin, cod, herring, smelt, and flounder. Beluga Whales eat approximately 2.5% to 3% of their body weight per day, which is about 18.2 to 27.2 kg (40 to 60 lb).
Habitat
The beluga inhabits a discontinuous circumpolar distribution in Arctic and sub-Arctic waters ranging from 50° N to 80° N, particularly along the coasts of Alaska, Canada, Greenland, and Russia. The southernmost extent of their range includes isolated populations in the St. Lawrence River estuary and the Saguenay fjord, around the village of Tadoussac, Quebec, in the Atlantic and the Amur River delta, the Shantar Islandsand the waters surrounding Sakhalin Island in the Sea of Okhotsk.
Conservation
From a conservation perspective, the Beluga Whale is considered "near threatened" by the International Union for Conservation of Nature; however the subpopulation from the Cook Inlet in Alaska is considered critically endangered and is under the protection of the United States' Endangered Species Act. Of seven Canadian beluga populations, two are listed as endangered, inhabiting eastern Hudson Bay, and Ungava Bay.
Reproduction
Males reach sexual maturity between four and seven years, while females mature at between six and nine years. Female belugas typically give birth to one calf every three years. Most mating occurs between February and May, but some mating occurs at other times of year. It is questionable whether the beluga has delayed implantation. Gestation lasts 12 to 14.5 months.Calves are born over a protracted period that varies by location. In the Canadian Arctic, calves are born between March and September, while in Hudson Bay, the peak calving period is in late June, and in Cumberland Sound, most calves are born from late July to early August. Newborns are about 1.5 metres (4.9 ft) long, weigh about 80 kilograms (180 lb), and are grey in color. The calves remain dependent on their mothers for at least two years.