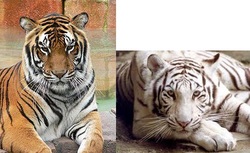 Facts
Also known as: Royal Bengal Tiger
Conservation Status: Endangered
Location: India, Bangladesh, Nepal, Bhutan
Lifespan:
Scientific Classification
Kingdom: Animalia
Phylum: Chordata
Class: Mammalia
Order: Carnovora
Family: Felidae
Subfamily: Pantherinae
Genus: Panthera
Species: P. tigris
Subspecies: P. t. tigris
Trinomial name: Panthera tigris tigris
Description
Length of head to tail: Male 270 to 310 cm (110 to 120 in) Females 240 to 265 cm (94 to 104 in)
Tail length: 85 to 110 cm (33 to 43 in)
Height at shoulder: 90 to 110 cm (35 to 43 in)
Average weight: Male 221.2 kg (488 lb). Female 139.7 kg (308 lb)
Other: Its coat is a yellow to light orange, and the stripes range from dark brown to black; the belly is white, and the tail is white with black rings. A mutation of the Bengal subspecies, the white tiger, has dark brown or reddish brown stripes on a white background, and some are entirely white. Black tigers have tawny, yellow or white stripes on a black background color. The skin of a black tiger, recovered from smugglers, measured 259 cm (102 in) and was displayed at the National Museum of Natural History, in New Delhi. The existence of black tigers without stripes has been reported but not substantiated. The Bengal Tiger's roar can be heard from 3 km (1.9 miles).
Behaviour
Tigers do not live in prides as lions do. They do not live as family units because the male plays no part in raising his offspring. Tigers mark their territory by spraying urine on a branch or leaves or bark of a tree, which leaves a particular scent behind. Tigers also spray urine to attract the opposite sex. When an outside individual comes into contact with the scent, it learns that the territory is occupied by another tiger. Hence, every tiger lives independently in its own territory.

Male Bengal tigers fiercely defend their territory from other tigers, often engaging in serious fighting. Female tigers are less territorial: occasionally a female will share her territory with other females. If a male happens to enter a female's territory, he will probably mate with her, if she is not already pregnant or has a litter. If she is pregnant or has a litter, he has no choice but to find himself a new territory and another potential mate. Similarly, females entering a male's territory are known to mate with him. Both males and females become independent of their mother around 18 months old, whereupon the cubs have to establish their own territories and fend for themselves. A male's territory is larger than a female's territory.
Predators or Prey?
The potential predators of young tigers (cubs) are leopards, dholes, hyenas, python snakes, crocodiles and specially, other tigers. Adult male tigers, just as lions and jaguars, will readily kill any cub they find, other than their own. An injured but full grown tiger is unlikely to be attacked by another predator; even wounded, it is too dangerous. Only another tiger would take advantage in that situation, if the wounded tiger has something the other wants (territory, females, etc).Tigers are obligate carnivores. They prefer hunting large ungulates such as chital, sambar, gaur, and to a lesser extent also barasingha, water buffalo, nilgai, serow and takin. Among the medium-sized prey species they frequently kill wild boar, and occasionally hog deer, muntjac and Gray langur. Small prey species such as porcupines, hares and peafowl form a very small part in their diet. Due to the encroachment of humans onto their habitat, they also prey on domestic livestock. Bengal tigers have also been known to take other predators, such as leopards, wolves, jackals, foxes, crocodiles, Asiatic black bears, sloth bears, and dholes as prey, although these predators are not typically a part of the tiger's diet. Adult elephants and rhinoceroses are too large to be successfully tackled by tigers, but such extraordinarily rare events have been recorded. The Indian hunter and naturalist Jim Corbett described an incident in which two tigers fought and killed a large bull elephant. If injured, old or weak, or their normal prey is becoming scarce, they may even attack humans and become man-eaters. In most cases, tigers approach their victim from the side or behind from as close a distance as possible and grasp the prey's throat to kill it. Then they drag the carcass into cover, occasionally over several hundred meters, to consume it. The nature of the tiger's hunting method and prey availability results in a "feast or famine" feeding style: they often consume 18–40 kilograms (40–88 lb) of meat at one time.
Diet
Tigers eat a variety of prey ranging in size from termites to elephant calves. However, an integral component of their diet are large-bodied prey weighing about 20 kg (45 lb), or larger such as, moose, deer species, pigs, cows, horses, buffalos, and goats. Occasionlly they may consume tapirs, epehant and rhino calves, bear species, leopards, and wild dogs.
Habitat
Tigers live in a diverse array of habitats such as tropical forrests, mangrove swamps, evergreen forests, grasslands, savannahs, and rocky areas.
Conservation
The Bengal Tiger has been classified as endangered by IUCN as the population is estimated at fewer than 2,500 individuals with a decreasing trend. None of the Tiger Conservation Landscapes within the Bengal's tiger range are large enough to support an effective population size of 250. The Bengal tiger is the most numerous of the tiger subspecies — with populations estimated at 1,706 in India, 200 in Bangladesh, 155 in Nepal and 67–81 in Bhutan. Over the past century, Tiger numbers have fallen dramatically, with a decreasing population trend. Habitat losses and the extremely large-scale incidences of poaching are serious threats to the species' survival. The extent of area occupied by tigers is estimated at less than 1,184,911 square kilometres (457,497 sq mi), a 41% decline from the area estimated in the mid-1990s.
Reproduction
Males reach maturity at 4–5 years of age, and females at 3–4 years. Mating can occur at any time, but is most prevalent between November and April. A tigress comes into heat at intervals of about 3–9 weeks, and is receptive for 3–6 days. After a gestation period of 104–106 days, 1–4 cubs are born in a shelter situated in tall grass, thick bush or in caves. Newborn cubs weigh 780–1600 g (2 lb) and they have a thick wooly fur that is shed after 3.5–5 months. Their eyes and ears are closed. Their milk teeth start to erupt at about 2–3 weeks after birth, and are slowly replaced by permanent dentition from 8.5–9.5 weeks of age onwards. They suckle for 3–6 months, and begin to eat small amounts of solid food at about 2 months of age. At this time, they follow their mother on her hunting expeditions and begin to take part in hunting at 5–6 months of age. At the age of 2–3 years, they slowly start to separate from the family group and become transient — looking out for an area, where they can establish their own territory. Young males move further away from their mother's territory than young females. Once the family group has split, the mother comes into heat again.