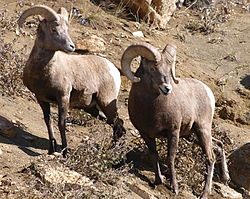 Facts
Conservation Status: Least Concern
Location: North America
Lifespan: 8 to 15 years
Scientific Classification
Kingdom: Animalia
Phylum: Chordata
Class: Mammalia
Order: Artiodactyla
Family: Bovidae
Subfamily: Caprinae
Genus: Ovis
Species: O. canadensis
Binomial name: Ovis canadensis
Description
Weight: Males - 58 to 143 kg (127 to 316 lb). Females - 34 to 85 kg (75 188 lb).
Height: Males - 36 to 41 in (91 to 100 cm). Females - 30 to 36 in (76 to 91 cm).
Length: Males - 69 to 79 in (180 to 200 cm). Females - 54 to 67 in (140 to 170 cm).
Weight of horns: 14 kg (13 lb)
Other: Male bighorn sheep have large horn cores, enlarged cornual and frontal sinuses and internal bony septa. These adaptations serve to protect the brain by absorbing the impact of clashes. Bighorn sheep have pre-orbital glands on the anterior corner of each eye, inguinal glands in the groin and pedal glands on each foot. Secretions from these glands may support dominance behaviors.
Behaviour
Bighorn sheep live in large flocks, and do not typically follow a single leader ram, unlike the mouflon, the ancestor of the domestic sheep, which has a strict dominance hierarchy. Prior to the mating season or "rut", the rams attempt to establish a dominance hierarchy that determines access to ewes for mating. It is during the prerut period that most of the characteristic horn clashing occurs between rams, although this behavior may occur to a limited extent throughout the year. Ram's horns can frequently exhibit damage from repeated clashes. Females exhibit a stable, non-linear hierarchy that correlates with age. Females may fight for high social status when they are integrated into the hierarchy at 1–2 years of age. Rocky Mountain Bighorn rams employ at least three different courting strategies. The most common and successful is the tending strategy in which a ram follows and defends an estrous ewe. Tending takes a lot of strength and dominance and thus ewes are more receptive to tending males, feeling that they are the most fit. Another tactic is coursing which is when rams fight tending rams for temporary access to defended ewes. Ewes tend to avoid coursing males so the strategy is not effective. Rams will also employ a blocking strategy. They will prevent an ewe from accessing tending areas before she even goes into estrous.
Predators or Prey?
Predators of Bighorn sheep include cougars, golden eagles, wolves, coyotes, bears, bobcats, and lynx. On cliffs, adult Bighorns can easily escape all but the cougars. When they migrate--descend to the foothills, the bighorn's sure-footedness is no advantage and they may then fall prey to predators. Golden eagles attack young lambs whenever they find them unprotected. The Bighorn Sheep have no prey as they are herbivores. This means that they only eat plant materials.
Diet
The bighorn typically use open areas of low growing vegetation near steep, rugged terrain for feeding. They graze and browse a wide variety of plant species including cacti, but green grasses are preferred. Bighorns have a complex digestive process that maximizes removal of nutrients from their food. By passing food from one stomach compartment to another and chewing in between, nutrients are efficiently absorbed and only concentrated dry droppings remain.
Habitat
All Bighorn Sheep migrate between high mountain slopes in the summer and foothill slopes in winter. They live in areas that are rarely distributed by humans. Bighorn Sheep are found on high, rugged, sparsely wooded mountain slopes, cliffs, and rocky, lightly wooded canyons and foothills. They feed in early morning, at midday, and in the evening. Between the grazing they lie down, resting, and chewing their cud and digesting their food. They return to a bedding spot each night, an area of about 4 feet wide and wallowed down about 1 inch. This bed usually smells of their urine and is edged with droppings. Bighorn Sheep return to these beds, staying for extended periods during their yearly migrations, and may use them again and again over several years.
Conservation
The number of desert bighorn in North America in pristine times is unknown but most likely was in the tens of thousands. Seton estimated the pre-Columbian numbers of all subspecies of bighorn sheep in North America at 1.5-2 million. By 1960, however, the overall bighorn population in the United States, including desert bighorns, had dwindled to 15,000-18,200. Buechner documented major declines from the 1850s to the early 20th century. These declines were attributed to excessive hunting; competition and diseases from domestic livestock, particularly domestic sheep; usurpation of watering areas and critical range by human activities; and human-induced habitat changes.
Reproduction
Bighorn ewes exhibit a six-month gestation. In temperate climates, the peak of the rut occurs in November with one, or rarely two, lambs being born in May. Most births occur in the first two weeks of the lambing period. Pregnant ewes of the Rocky Mountains migrate to alpine areas in spring, presumably to give birth in areas safer from predation but are away from areas with good quality forage. Lambs born earlier in the season enjoy greater survival than lambs born later. Ewes that give birth late in the season are at an earlier stage of lactation when forage quality declines and may not produce sufficient milk to ensure lamb survival. Newborn lambs weigh from 8 to 10 pounds (3.6 to 4.5 kg) and can walk within hours. The lambs are then weaned when they reach 4–6 months. The lifespan of rams is typically 9–12 years, with 10–14 years for ewes.