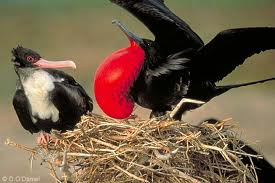 Birds perform the most elaborate and flamboyant courtship rituals. Sweet serenades, intricate dances, and the display of exotic plumage are all part of the contest to attract a mate. Courtship displays perform several quite different functions, from identifying a bird's species and sex to helping individuals choose suitable partners. They also help strengthen pair bonds and ensure that both birds are ready to breed at the same time.
Courtship variety
Every different species of bird performs a slightly different courtship ritual. These slight differences in the rituals ensures that the birds choose another bird from the same species. Males and females also perform different but complementary differences so that each bird chooses another bird of the opposite gender. Just before the mating season starts, many male birds possess unique breeding plumage, and will then show off their colourful feathers as an advertisement of both their species and their gender. Some birds are less colourful, and therefore cannot use their plumage to distinguish between genders. However, the genders of these birds can be identified by complicated and individual songs.
Male dandies
It is usually the male that plays the leading role in courtship. The male displays his colourful plumage to the less colourful female who acts like a judge. One of the most colourful courtships is that of the male Peacock. He shows of a dazzling array of blue, green, and gold. Not all bird rely on colourful plumage to impress the females. The Blue-footed Booby  performs a courtship dance to display his bright blue webbed feet to a female.
Gift giving
Many birds perform a courtship ritual known as feeding or gift giving. Typically, the female will act like a young bird begging for food by spreading her wings and opening her beak. Some also give calls which mimic their young. This ritual allows her to build up her strength for the demanding task of laying and incubating the eggs, and also ensures her of her mate's suitability as a provider for the chicks. Instead of food, some species present their mate with nesting material.
Mutual display
Similar plumage or colouring between the sexes often means that they are more similar in their courtship displays. Therefore, they are more likely to be of the same species. Albatrosses perform a dance together. Theu begin by bowing their heads to eachother, and opening their wings. They may then dance around eachother, while opening their beaks, and calling loudly to eachother. The longer the ritual lasts, the closer the bond between the two birds is. Some birds perform their courtship rituals in the air. Lapwings try to impress the mate by tumbling through the air, as if they are about to crash land. Skylarks advertise themselves by flying high into the air and singing loudly. Birds will often start the courtship ritual awkwardly as if unsure of the next move. As they progress, they become more skilful. Once the ritual is performed and completed, the birds will often mate. Many pairs will stay together after mating in order to share the tasks of nest building, incubaing the eggs, and raising the young.