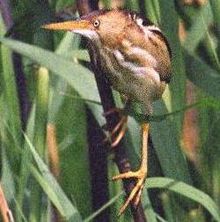 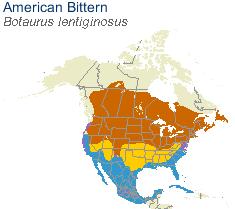 Purple : Resident Brown: Summer (breeding) Blue: Winter (non breeding) Yellow: Migration
Scientific Classification
Kingdom: Animalia
Phylum: Chordata
Class: Aves
Order: Pelecaniformes
Family: Ardeidae
Subfamily: Botaurinae
Genera: Ixobrychus and Botaurus
Description
Length: 58 to 85 cm (23 to 33 in)
Wingspan: 92 to 115 cm (36 to 45 in)
Weight: 370 to 1,072 g (0.82 to 2.36 lb)
Other: The Bittern is a type of Heron with brown plumage, covered in dark streaks. It flies on broad, rounded, bowed wings. When flying, Bitterns retract their necks, rather than stretching them out as some birds do.
Subspecies
The genus Ixobrychus contains mainly small species:

The genus Botaurus is the larger bitterns:

The genus Zebrilus includes only one species:
Behaviour
If it senses that it has been seen, the American Bittern becomes motionless, with its bill pointed upward, causing it to blend into the reeds. It is most active at dusk. More often heard than seen, this bittern has a call that resembles a congested pump. The bittern is a generally shy, solitary animal, and it can be unusual to see one, but the loud booming call of the male can inform birdwatchers that bitterns are in the area, even if unseen. Many bittern species are migratory, travelling south for the winter.
Predators or Prey?
Predators of the Bittern include foxes, coyotes, and great horned owls. Like herons, bitterns may stand in water imitating reeds while they hunt. This helps them capture most small swamp animals.
Diet
The Bittern eats fish, amphibians, insects, frogs, eels, small snakes, crayfish, and other small swamp animals.
Habitat
The Bittern habitats wetlands with reed beds in Britain. This includes Minsmere, Suffolk and Leighton Moss, and Lancashire as the RSPB preserves them there. The Bitterns are dependent on the reed beds as it provides material for the nests.
Conservation
Its dependence on reedbeds and very small population make it a Red List species - one of the most threatened in the UK. The number of Bitterns is based on the number of brooding males as their call is unique to each others. As the Bitterns are dependent on reed beds, the RSPB have managed to restore reed beds and create new ones. Due to the low population size, the increased mortality during harsh winter weather can bring about significant population decline and even local extinctions. Creation of ice-free areas and supplementary feeding during severe winter weather could reduce winter mortality substantially. The bittern is listed on Schedule 1 of the Wildlife & Countryside Act 1981, which affords special protection at all times. It is an offence to take, injure or kill a bittern or to take, damage or destroy its nest, eggs or young. It is also an offence to intentionally or recklessly disturb the birds at or close to their nest during the breeding season. Violation of the law can attract fines up to £5,000 per offence and/or a prison sentence of up to 6 months.
Reproduction
The nest is made of reed stems, and positioned close to the water's edge. If the water level rises, the female will add more material to the nest to keep it above the water level. Incubation lats approximately 25 days. Every 2 to 3 days, a clutch of 5 to 6 olive-brown eggs are hatched. The hatching takes place between the end of March to mid-July. The young are looked after by the female, who feeds them by regurgitated food. At 15 or 16 days old, the young leave the nest for short periods at a time. They fledge at about 50 to 55 days old, and become independent soon afterwards.