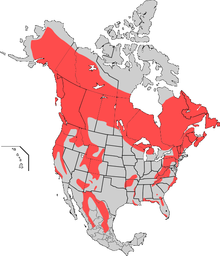 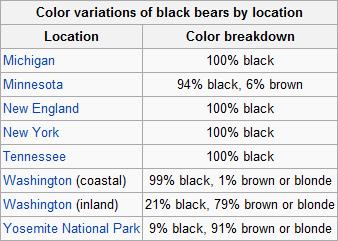 Behaviour
Sometimes the Black Bear becomes attracted to human communities because of the immediate availability of food. American black bears often mark trees using their claws to show dominance in an area. Dominance is determined by the highest claw mark found on the tree. This behavior is common to many species of bears found in the United States and Canada. The Black Bear has about 20 known different calls in 8 different contexts. Sounds expressing aggression include growls, woofs, snorts, bellows and roars. Sounds expressing contentment include mumbles, squeaks and pants. American black bears tend to be territorial and non-gregarious in nature. They mark their territories by rubbing their bodies against trees and clawing at the bark. Black bears are excellent and strong swimmers, doing so for pleasure and to feed. Black bears climb regularly to feed, escape enemies or to hibernate. Their arboreal abilities tend to decline with age. Adult black bears are mostly nocturnal, but juveniles are often active in daytime. Black bears enter their dens in October and November. Prior to that time, they can put on up to 30 pounds of body fat to get them through the seven months during which they fast. Hibernation in black bears typically lasts 3–5 months. During this time, their heart rate drops from 40–50 beats per minute to 8 beats per minute.
Predators or Prey?
Black Bears have humans as the main predator. Native American and European settlers have been known to hunt and attack these bears. Some Native Americans acknowledged the intelligence of the Black Bear and decorated the skull of the bears they killed. Black Bears have prey that consist of insects such as bees for the honey and ants. There may also be attacks on humans, although this is not for food, but for domination over an area.
Diet
Black bears are omnivores, with their diets varying greatly depending on season and location. Up to 85% of the black bear's diet consists of vegetation, though they tend to dig less than brown bears, eating far fewer roots, bulbs, corms and tubers than the latter species. Black bears are fond of honey, and will gnaw through trees if hives are too deeply set into the trunks for them to reach them with their paws. The majority of the black bear's animal diet consists of insects such as bees, yellow-jackets, ants and their larvae. Black bears will fish for salmon during the night, as their black fur is easily spotted by salmon in the daytime.
Habitat
Black Bears typically live in largely forested areas, but do leave forests in search of food. Black bears typically inhabit deciduous forests, deserts, mixed forests and thornbrush forests. They rarely live in elevations of more than 12,000 feet (3,700 m). They usually inhabit elevations of 11,480 feet (3,500 m)
Conservation
The American black bear is listed by the IUCN as Least Concern, due to the species' widespread distribution and a large global population estimated to be twice that of all other bear species combined. The total Canadian black bear population is between 396,000 and 476,000, based on surveys taken in the mid 1990s in seven Canadian provinces, though this estimate excludes black bear populations in New Brunswick, Northwest Territories, Nova Scotia, and Saskatchewan. Surveys taken from 35 states in the early 1990s indicate that black bears are either stable or increasing, excepting Idaho and New Mexico. The overall population of black bears in the United States has been estimated to range between 339,000 and 465,000, though this excludes populations from Alaska, Idaho, South Dakota, Texas, and Wyoming, whose population sizes are unknown.
Reproduction
Sows (females) usually produce their first litter at the age of 3–5 years. The breeding period usually occurs in the June–July period, though it can extend to August in the species' northern range. The breeding period lasts for 2–3 weeks. Sows tend to be short tempered with their mates after copulating. The gestation period lasts 235 days, and litters are usually born in late January to early February. Litters usually consist of two cubs, though litters of 6 have been recorded. At birth, cubs weigh 10–16 ounces (280–450 g), and measure 8 inches in length. They are born with fine, gray, downlike hair, and their hind quarters are underdeveloped. They typically open their eyes after 28–40 days, and begin walking after 5 weeks. Cubs are dependent on their mother's milk for 30 weeks, and will reach independence at 16–18 months. At the age of six weeks, they attain 2 lb, by 8 weeks they reach 5 lb and by the age of 6 months they weigh 40–60 lb. They reach sexual maturity at the age of three years, and attain their full growth at 5 years.