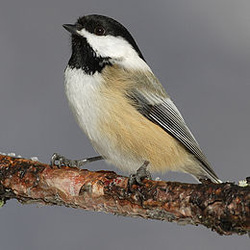 Scientific Classification
Kingdom: Animalia
Phylum: Chordata
Class: Aves
Order: Passeriformes
Family: Paridae
Genus: Poecile
Species: P. atricapillus
Binomial name: Poecile atricapillus
Description
The Black-capped Chickadee has a black cap and bib with white sides to the face. Its underparts are white with rusty brown on the flanks and its back is gray. It has a short dark bill, short wings and a long tail. Males are larger. The tail is normally primarily slate-gray but has been observed in central New Jersey in 2008 to be completely white and seemingly longer and more prominent than the normal gray tail. At least one other such white tail has been observed as a documented change occurring in one individual (banded) bird.
Behaviour
They are permanent residents, but sometimes move south within their range in winter. On cold winter nights, these birds reduce their body temperature by up to 10–12 °C to conserve energy. During the fall migration and winter, chickadees often flock together. Many other species of birds – including titmice, nuthatches, and warblers – can often be found foraging in these flocks. Mixed flocks stay together because the chickadees call out whenever they find a good source of food. This calling-out forms cohesion for the group, allowing the other birds to find food more efficiently. When flocking, Black-capped Chickadees soon establish a rigid social hierarchy. In sparsely populated rural or forested areas, chickadees are often less wary than in urban settings. They may be observed exhibiting a sense of curiosity about the unfamiliar human activity within their habitat. The vocalizations of the Black-capped Chickadees are highly complex (Ficken et al., 1978). 13 distinct types of vocalizations have been classified, many of which are complex and can communicate different types of information. Chickadees' complex vocalizations are likely an evolutionary adaptation to their habitat: they live and feed in dense vegetation, and even when the flock is close together, individual birds tend to be out of each others' visual range.Black-capped Chickadee, Iona Beach Regional ParkThe song of the Black-capped is a simple, clear whistle of two notes, identical in rhythm, the first roughly a third above the second. This is distinguished from the Carolina chickadee's four-note call fee-bee fee-bay; the lower notes are nearly identical but the higher fee notes are omitted, making the Black-capped song like bee bay.
Predators or Prey?
The Black-capped Chickadee's predators consist of hawks, northern shrikes, snakes, weasels, chipmunks, mice, squirrels, cats, and owls. They prey consists of insects that fly in the air.
Diet
These birds hop along tree branches searching for food, sometimes hanging upside down or hovering; they may make short flights to catch insects in the air. Insects form a large part of their diet, especially in summer; seeds and berries become important in winter. Black oil sunflower seeds are quickly taken from an urban bird feeder. They sometimes hammer seeds on a tree or shrub to open them; they also will store seeds for later use. During the winter, many individuals accustomed to human habitation will readily accept seed from a person's hand.
Habitat
The breeding habitat of the Black-capped Chickadee is mixed or deciduous woods in Canada, Alaska and the northern United States.
Conservation
In the states of Alaska and Washington, and in parts of western Canada, Black-capped Chickadees are among a number of bird species affected by an unknown agent that is causing beak deformities, which may cause stress for affected species by inhibiting feeding ability, mating, and grooming. Black-capped Chickadees were the first affected bird species, with reports of the deformity beginning in Alaska in the late 1990s, but more recently the deformity has been observed in close to 30 bird species in the affected areas, as reported by the Alaska Science Center of the United States Geological Survey.
Reproduction
The Black-capped Chickadee nests in a hole in a tree; the pair excavates the nest, using a natural cavity or sometimes an old woodpecker nest. This Chickadee will also nest in a nesting box. Its nesting season is from May through June. It may interbreed with Carolina Chickadeesor Mountain Chickadees where their ranges overlap.