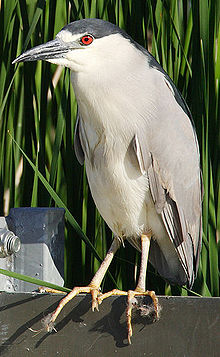 Stats
Conservation Status: Least Concern
Location:
Lifespan:
Scientific Classification
Kingdom: Animalia
Phylum: Chordata
Class: Aves
Order: Ciconiiformes
Family: Ardeidae
Genus: Nycticorax
Species: N. nycticorax
Binomial name: Nycticorax nycticorax
Description
Length: 64 cm (25 in)
Weight: 800 g (28 oz)
Other: They have a black crown and back with the remainder of the body white or grey, red eyes, and short yellow legs. Young birds are brown, flecked with white and grey. These are short-necked and stout herons.
Behaviour
These birds stand still at the water's edge and wait to ambush prey, mainly at night or early morning. They primarily eat small fish, crustaceans, frogs, aquatic insects, small mammals and small birds. During the day they rest in trees or bushes. Like other herons, Night Herons hunt in shallow waters using their long necks and thick bills to snatch at prey. Slow patient stalkers, they may remain motionless for long periods, standing with their neck tucked in, giving their typical hunched posture. Black Crowned Night Herons may also hunt by vibrating their bills in the water to lure prey into investigating the disturbance. They may walk about or even swim when searching for food. Although they roost and nest together, and may even travel to feeding sites in a flock, they usually hunt alone and fiercely defend a feeding territory from others of their kind. Although they may fly around during the day, Night Herons hunt throughout the night and early morning when the other herons are sleeping. But when food is scarce or in high demand (e.g., during the breeding season), they may also hunt during the day.Juveniles and adults out of breeding season may also hunt during the day, possibly because other herons consider them less of a threat.
Predators or Prey?
The Black-crowned Night Heron have no predators. They are, however, threatened by disease and habitat loss. Prey is shaken vigorously until stunned or killed and then juggled about in the beak and swallowed head first. They have strong digestive acids that can dissolve even bones. Their faeces are white and limey because of the dissolved calcium.
Diet
Besides fish, Black Crowned Night Herons eat a wide range of prey from aquatic invertebrates (crustacea, mussels, squid), amphibians and reptiles (lizards, snakes) o land invertebrates (leeches, earthworms, insects) including small mammals (rodents). They also eat plants and are not above eating carrion and rooting around garbage dumps.
Habitat
Black Crowned Night Herons prefer to nest and roost in mangroves, but prefer to hunt in freshwater wetlands. They travel to and from these hunting sites in long skeins in the evening, returning at dawn. They are found wherever there are suitable trees for roosting and nesting. Usually near brackish and freshwater wetlands: mangroves, mudflats, estuaries, ponds, reservoirs, canals, rivers. But they have also been observed in suburbs of large cities.
Conservation
Although Black Crowned Night Herons are among the most common herons in the world, this bird is on the Red Data list of Singapore. It is threatened by habitat loss; its preferred habitat are considered mosquito breeding sites and are not tolerated near human homes or regularly fogged. One traditional breeding site in Singapore was at Khatib Bongsu where up to 1,200 birds nested. This colony was destroyed by fogging which poisoned the birds. The birds have not returned. The birds' popularity is not aided by the fact that they are also a carrier of Japanese Encephalitis, a dangerous disease. In other parts of the world, they have been hunted for food (they apparently taste good, especially the young birds) or as a pest at fish farms. Like other wetland inhabitants, they are also threatened by water pollution and the overuse of pesticides.
Reproduction
Black Crowned Night Herons appear to breed year-round. One colony of about 20 pairs survive at the Jurong Lake area. Elsewhere, they have been known to roost in huge breeding colonies containing tens of thousands of birds. During breeding season, their head plumes become longer, their black plumage take on a bluish-green gloss and their legs, feet and lores turn red. Believed to be monogamous, the males perform an elaborate courtship ritual, usually at night. They clapper their bills as they walk in a crouch, followed by wing flapping and a song and a dance (hissing as they rock from foot to foot). At first, the female may be rejected, but eventually she is accepted and they preen each other. During courtship, the male also presents sticks to his chosen female. When the pair bond is formed, their legs blush a pinkish-red. 3-6 pale blue-green eggs on average are laid. Both parents incubate. On hot days, they may cool off the eggs by wetting their feathers. In 24-26 days, nearly naked hatchlings emerge. Both parents raise the young on regurgitated food at first, then whole prey as they young are older. The young usually scramble out of the nest and wait nearby for their parents to return. They are aggressive and will throw up on intruders. As a last resort, they may throw themselves into the water and paddle away. When parents return to the nest, they signal to the young so they know they are not predators, by bowing to show their glossy black crown and long white head plumes. The young fledge in about 2-3 weeks but don't leave their parents until about 6-7 weeks.