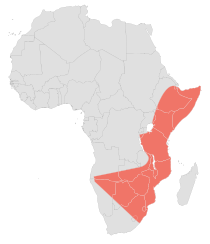 Scientific Classification
Kingdom: Animalia
Phylum: Chordata
Class: Reptilia
Order: Squamata
Suborder: Serpentes
Family: Elapidae
Genus: Dendroaspis
Species: D. polylepis
Binomial name: Dendroaspis polylepis
Description
Average length: 2.5 m (8.2 ft)
Weight: 1.6 kg (3.5 lb)
Speed: 4.32 to 5.4 m/s (16 to 20 km/h) (10 to 12 mph)
Other: The black mamba's back skin colour is olive, brownish, gray, or sometimes khaki.
Behaviour
The black mamba uses its speed to escape threats, not to hunt prey. It is known to be capable of reaching speeds of around 20 kilometers per hour (12 mph), traveling with up to a third of its body raised off the ground.Over long distances the black mamba travels 11 to 19 kilometers per hour (6.8 to 12 mph), but in short bursts it can reach a speed of 23 kilometers per hour (14 mph), making it the fastest land snake. It is shy and secretive; it always seeks to escape when a confrontation occurs. If a black mamba is cornered it mimics a cobra by spreading a neck-flap, exposing its black mouth, and hissing. If this endeavor to scare away the attacker fails, the black mamba may strike repeatedly. The black mamba is a diurnal snake, which means that it sleeps during the night and is awake during the day. Although its scientific name seems to be indicative of tree climbing, the black mamba rarely moves through the trees. These snakes retreat when threatened by predators.
Predators or Prey?
Mongooses are the main predators of the black mamba. They usually prey on young snakes and eggs. Mongooses are notable for their resistance to snake toxins. This resistance is caused by mutations in their nicotinic acetylcholine receptor. These mutations prevent the neurotoxin present in snake venom from binding to the receptor, thus preventing the associated toxicity. On account of the mongoose's resistance to snake venom, adult mambas have trouble fighting them off although mongooses often attack young snakes as they can be killed with ease. Cape file snakes are also predators of young black mambas.As stated, the black mamba is diurnal. It is an ambush predator that waits for prey to get close. If the prey attempts to escape, the black mamba will follow up its initial bite with a series of strikes. When hunting, the black mamba has been known to raise a large portion of its body off the ground. The black mamba will release larger prey after biting it, but smaller prey, such as birds or rats, are held onto until the prey's muscles stop moving. They have been known to prey on bushbabies, bats, and small chickens.
Venom
The black mamba's venom is Dendrotoxin. The toxin disrupts the exogenous process of muscle contraction by means of the sodium potassium pump. An example of the potency of the venom is seen through the records of mice. Normally, the death time of a mouse after subcutaneous injection of many toxins is around 7 minutes. However, a black mamba venom can kill a mouse after 4.5 minutes.
Diet
The Black Mamba eats all sorts of animals from rats to insects and everything in between. It relies solely on its venom and not its venom. The reason is that it is rather slender and cannot rely on sheer muscle power like the typical constrictor snakes.
Habitat
The black mamba has adapted to a variety of climates ranging from savanna, woodlands, rocky slopes, dense forests and even humid swamps. The grassland and savanna woodland/shrubs that extend through central, eastern and southern Africa are the black mamba's typical habitat. The black mamba prefers more arid environments such as light woodland, rocky outcrops, and semi-arid dry bush country.
Conservation
The black mamba has no special conservation status. However, encroachment on its territory is not only putting pressure on the species but contributes to more potentially dangerous human contact with these snakes.
Reproduction
Breeding usually takes place in late spring or early summer. After mating the male will return back to its own home. The female will then lay between 10 and 25 eggs, usually in decaying vegetation. The decomposition of the vegetation gives off heat, which helps to warm the eggs and speed up hatching time. The shells of the eggs allow water and oxygen to reach the developing embryos. Black mamba hatchlings are around 51 centimetres long and greyish-green in colour. The hatchlings are independent immediately and can catch prey the size of a small rat. Within a year, they reach 2 metres.